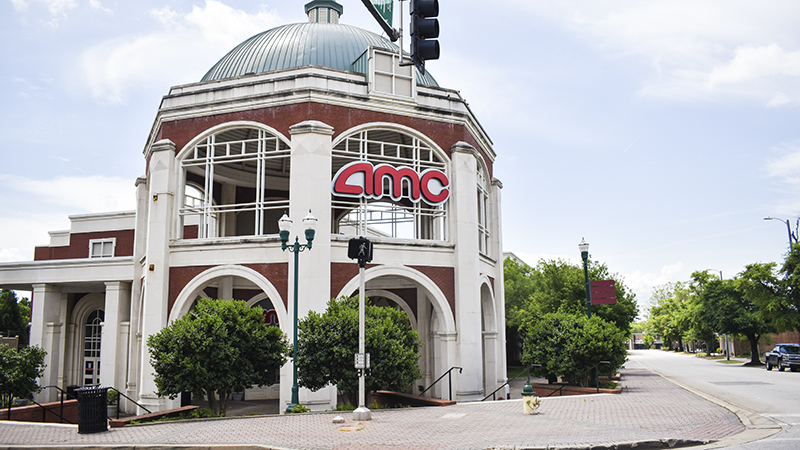 Questions about AMC Entertainment’s future across the country are murky as the company said it’s not sure if or when the business can return to normal.

AMC does have one location in LaGrange, at 201 Main Street. Due to COVID-19, the LaGrange location and most theaters throughout the country have been closed since March.

On Wednesday, AMC released its first-quarter regulatory filing to the Securities and Exchange Commission (SEC). Based on that filing, AMC said it expected to report a loss of between $2.12 billion to $2.42 billion for the first quarter ending March 31.

The filing from the company said it would continue to monitor the lifting of government restrictions throughout the country. In early May, Georgia Gov. Brian Kemp lifted the restrictions on movie theatres. However, AMC said it’s possible the theatre’s distributors could want limitations lifted in more places.

The company said it is planning to reopen theatres during the summer months, and its current cash balances allow it to do so. But, AMC said the ability to operate depends on the timing of a full resumption of operations, the timing of movie releases and its ability to generate revenues.

AMC said the ability to estimate its required assets couldn’t be 100 percent assured because it has never been completely shut down in the past. Additionally, AMC said if the company doesn’t reopen within its estimated timeline, it could require more capital and potentially borrow money if it doesn’t reach its desired revenues or if COVID-19 were to shut down businesses again.

“Such additional financing may not be available on favorable terms or at all,” AMC said. “Due to these factors, substantial doubt exists about our ability to continue as a going concern for a reasonable period of time.”

The company said it has implemented measures to combat the loss of revenue during COVID-19. There have been partial or full furloughs of all corporate-level employees, including senior executives, with the individual workload and salary reductions ranging from 20 to 100 percent.

Also, there has been a cancelation of merit pay increases and the elimination or reduction of non-healthcare benefits.

At the theatre level, the company said all crew members had been fully furloughed, and the theatre-level management has been reduced to the minimum level necessary to begin operations when permitted.

The company said it has been working with its landlords, vendors and business partners to manage, defer or abate certain costs during the closure caused on the COVID-19 pandemic.

The Downtown LaGrange Development Authority owns the building on Main Street, and it is leased to AMC.

“We cannot predict when or if our business will return to normal levels,” AMC said. “If the coronavirus continues to spread in the parts of the world where we operate, we may elect on a voluntary basis to again halt operations (after their reopening) certain of our theatres, or governmental officials may order additional closures, impose further restrictions on travel or introduce social distancing measures such as limiting the number of people allowed in a theatre at any given time.”

LaGrange Mayor Jim Thornton said AMC has asked the DLDA for rent deferment, which will be discussed at the DLDA next board meeting, usually held at 2 p.m. on the Tuesday of the month.

According to LaGrange City Attorney Jeff Todd, AMC has proposed that its base rent from April 1 to June 30 be deferred.

Starting July 1 through Dec. 31, AMC has proposed to pay 15 percent of total sales, and the rent for any month can’t exceed the rent originally agreed upon prior to April 1.

If the percentage does exceed the previous base rent, the amount exceeding the 15 percent will be put aside to be repaid to the city later.

Starting Jan. 1, 2021, the agreed-upon base rent agreed upon before April 1 will begin again. Beginning Feb. 1, 2021, any rent deferred from April 1, will be repaid in equal monthly installment throughout the remaining lease.

Thornton said the theatre was built with Carmike Cinemas, which is now AMC. At the time, the DLDA and Carmike entered into a 20-year bond with two 5-year extension options. Thornton said the lease payments were designed to pay off the bond, and there is about $1.2 million still owed and is scheduled to be paid off in March 2025.

Thornton said the building is worth about $6 million.

“If AMC were to default on the lease, and we certainly hope that doesn’t happen, the DLDA and city would get possession of the property back,” Thronton said. “If that were to happen, at that time, the DLDA board and the (LaGrange) City Council would evaluate the best future use for the property.”

Thornton said it could be used by another theater company or could be repurposed depending on the future of the movie theater industry. He said he hopes AMC recovers and can fulfill the terms of its lease to the city, but the city is prepared to respond if it doesn’t work out.

Bill Hunnicutt, executive director of the DLDA, said there are still moving pieces to the AMC situation, but losing a downtown theater would be a huge loss to the community.

“This is an amenity that provides entertainment to all walks of life and all ages, so it would leave a huge void for our community,” he said. “The presence of a theater in downtown brings families and people downtown regularly to enjoy the experience of enjoying the large screen movie experience.”

Hunnicutt said the people at the movies also tend to dine and shop downtown, so the loss of the business would ripple throughout the economy. Moreover, he said the loss of jobs is also a concern.

“The leaders of our community 20 years ago had the forethought to consult with urban planning specialists and put a plan together for Downtown LaGrange,” he said.

“One of the main points to that plan was having a theater downtown. That is why so much effort was put into having a nice theater here in the middle of town. Most towns our size do not have that experience anymore. When people visit here from other places, they rave about what a great idea that was to keep a theater downtown.”