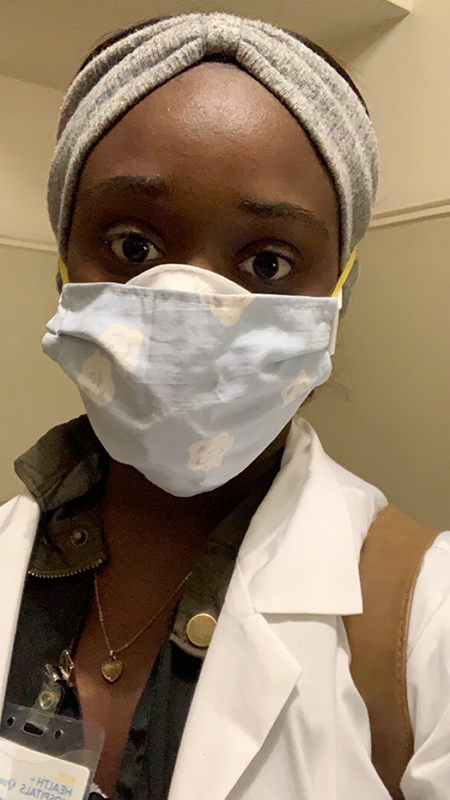 Her friends call her Tina, her parents call PA Reid, but the world calls her a health care hero.

Destina Reid, MMSc, PA-C recently got back from almost two months in New York working at a hospital in Jamaica Queens.

“Within a few days when the pandemic hit I was on a plane headed to NYC,” Reid said. “I was staffed at Queens Hospital from March to May 14 helping get the COVID-19 crisis under control.”

When the pandemic first hit, New York was one of the major hotspots for COVID-19. Reid said it took a few days to adjust to chaos that was hitting all the hospitals in NYC.

“It was just as hectic as they said it was on the news,” Reid said. “The emergency department of Queens Hospital was one of the primary locations for COVID patients getting treatment. We had hundreds of patients in maybe a 30-person room ER department.”

Reid said patients were everywhere either in beds, chairs and the overflow went to the pediatric ER department.

“It was chaos to say the least,” Reid said. “It was very overwhelming. That first week, there was patients coming in by the hundreds. Patients would walk in and be able to speak, but within hours they were deceased. It was very tragic and overwhelming, but very humbling as well.”

Everyday Reid would put on scrubs, paper scrubs on top, a long sleeve lab jacket, a N95 mask, goggles and a shield.

Additionally, between each patient she would swap gloves.

She was working more than 15 hours at the hospital, helping out in every aspect she could.

“We would come in, and take over patients that came in that night or were still waiting,” Reid said. “I am a mid-level practitioner, so I’m able to see patients, order lab treatments, prescribe medications and that kind of stuff for the day.”

On an everyday basis, Reid would see more than 100 patients.

“We had our own patients, but would check on other patients as well,” Reid said. “We would switch out oxygen tanks, intubate or help with other supervising physicians. Within a normal time, frame, intubating patients only happens three to four times a month. This was happening 20 to 30 times within a 12-hour time frame.”

When Reid returned home, she had completed 55 15-hour shifts at Queens Hospital.

“This experience taught me to never take anything for granted,” Reid said. “Life comes at you so fast and you never know when. It allowed me to practice what I have been studying for the last eight years of my life. I learned so much from the staff at Queens Hospital, things that I cannot have learned in any textbook. The people I met and the new friends I gained were life changing. It was a tragic experience as well. You don’t have time to process everything that is happening around you which also means you don’t have time think about your true emotions.”

Reid said the whole experience gave her a sense of hope for humanity.

“It didn’t matter what people looked like, what their background consisted of, we treated them like they were our families,” Reid said. “I also gave me a sense of pride. Pride To know that I made a difference in some way that may have impacted others.”