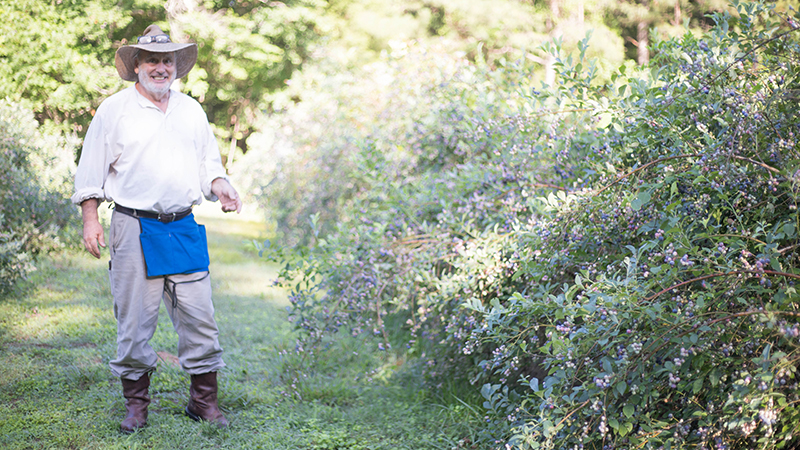 On Rabbit Eye Farm in West Point, there’s waves of blue bushes taking over an acre of land. When you get close enough, those waves turn into large, plump blueberries ready to be picked.

Farm owner, Douglas Roberts is once again opening his farm for the public to pick.

“God has given me an abundance of blueberries,” Roberts said.

Roberts has only ever missed one season of blueberry picking since planting his crop in 2013.

Rabbit Eye Farm opens every Sunday, Tuesday and Thursday in the morning from 8 a.m. to 11 a.m. and in the evening 6 p.m. to 9 p.m. The farm is located at 279 Grayhill School Road in West Point.

Other times are able by appointment. Large 2.5 quart buckets with liners are provided for each picker and are $15.

“We don’t weigh you when you come in and leave, so we want people to eat why they pick,” Roberts said. “We don’t want you to get in the car hungry and start digging into what you just picked and not have enough for any recipe you wanted to use blueberries for. So please, eat while you pick.”

The farm only takes cash or Paypal, and also offers ready-to-go pre-picked blueberries for pickup at $25 per 2.5 quart.

Roberts said he believes in sustainable agriculture and has an abundance of other fruits and vegetables on his property.

“I’m planting a lot of things for myself,” Roberts said. “I am a certified permaculture designer. I took a course from Geoff Lawton. He’s one of the best in the world, and he studied directly under Bill Mollison, who was the father of this permaculture movement.”

Roberts said in the future he hopes to see a community-supported agriculture (CSA) system be made in the West Point area.

CSA is a system that connects the producer and consumers within the food system more closely by allowing the consumer to subscribe to the harvest of a certain farm or group of farms.

“I want to grow this farm and help more people have access to fruit and vegetables,” Roberts said. “I want to farm for a very long time. I enjoy this, and I want to teach this. I want to show people how to do this and get people more food secure.”

Roberts said he continuously reaches out to his neighbors and people in the community to plant their own gardens.

“We are about to have our first community garden meetings to see if there is interest in one,” Roberts said. “We are also going to have a seed swap.”

Rabbit Eye Farm also sells honey from their seven hives. It is sold in quart jars at $20 a jar.

“This is real great place to come and be,” Roberts said. “People love to bring the kids out and for years we have seen the same children come and grow up.”