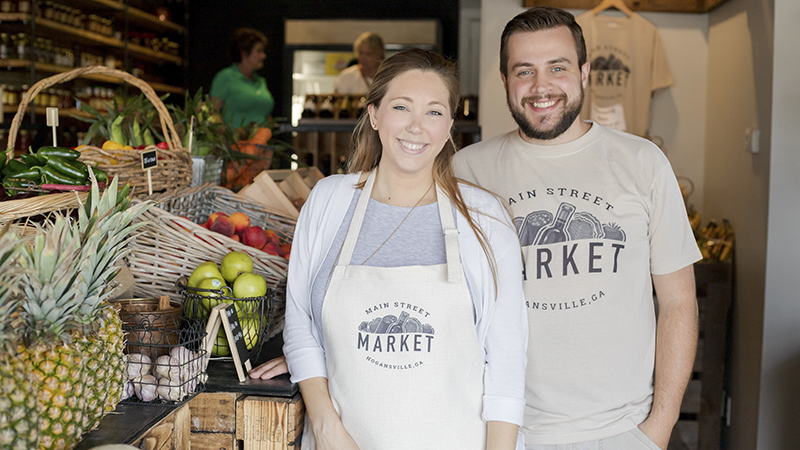 Mark and Lauren Ayers pose for a photo in their new produce market on Main Street in Hogansville. Main Street Market celebrated its grand opening on Saturday. Below, a customer shops for produce. — Photo by Jenna Oden

“We wanted to fill a community need,” said shop owner Mark Ayers. “We are in a food desert here in Hogansville, and we just want to be able to provide an affordable place to get healthy food.”

Mark and his wife Lauren moved Main Street Market into the original Hogansville Police Department, which closed down six years ago. Following the HPD’s exit, the building had been occupied by Pioneer Georgia, an organization that has been focusing on the economic and community development of the Hogansville.

“We love the building, and fell in love in it,” Lauren Ayers said. “It is here in the heart of downtown. We want everyone in town to have access to affordable produce, and everything is based around that.”

Mark said that the community of Hogansville faces transportation obstacles, where a large population in the city has no vehicle or way of going to a store.

“They cannot get to places that actually sell any produce, so they have to do online ordering and a lot of that time is often expensive,” Mark said. “This is in walking distance of the neighborhoods. They can walk to somewhere that has real, fresh produce.”

Almost everything offered in the store is Georgia grown or from local Georgia vendors.

“We wanted to support local, support local businesses and farmers and at the same time support our local community,” Mark said.

The shop also offers market and wine memberships that includes discounts, store credits, wine and other perks starting at $20 a month.

“We came up with the membership idea to help create more customers,” Mark said. “We wanted people to want to come every week and come more. It allows everyone else the community who love this idea to feel like they were a partner as well.”

One week ago, Mark and Lauren welcomed their new baby boy into the world which also pushed back their grand opening a week.

“The two were actually supposed to be months apart,” Mark said. “We wanted to open in April but due to the virus everything got pushed back. We are happy and still rocking it.”

Lauren said this year has been a big year with the new store, baby and Mark also becoming a councilmember for the city of Hogansville.

“We are going to add baked goods and meats within the next week to the shop as well,” Lauren said. “We are so excited to be part of Main Street business life.” 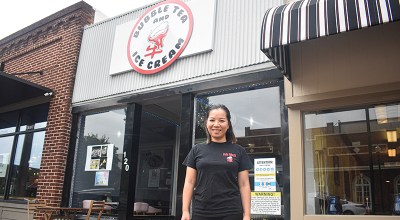