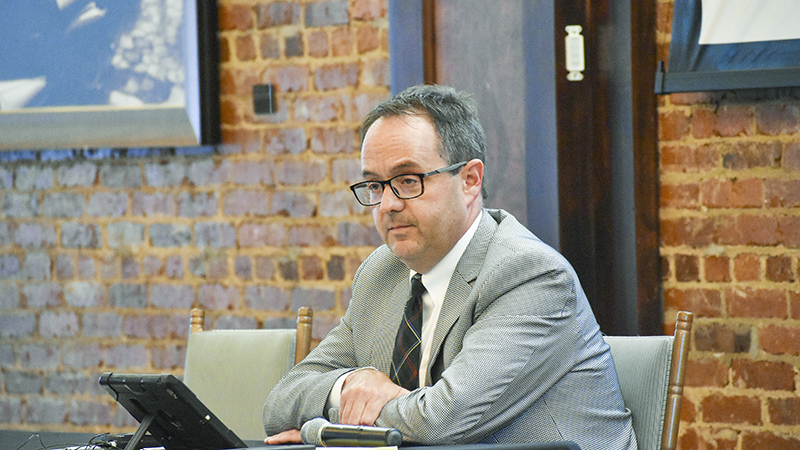 Thornton presented the ordinance for a first reading Tuesday evening to the LaGrange City Council. The ordinance said individuals with less than one ounce of marijuana would be subject to a civil fine and not a criminal offense.

The direction in the ordinance is for the municipal court to dispose of any case with a marijuana charge of less than one ounce and for a civil fine of $100 be given to that person.

Additionally, the LaGrange Police Department would be required to implement a mandatory training curriculum for its office to address the difference between the LaGrange ordinance and the state law about marijuana possession, arrest, detention and prosecution.

However, Dekmar suggested changes to make the punishment an ordinance violation with progressive monetary fines.

In a substitute ordinance that will be presented on June 23, the first offense of a person arrested for marijuana possession of less than one ounce will be subject to a $100 fine. The second offense will be a $300 fine and the third offense would be a $500 fine and a possible six-month jail sentence.

Dekmar said when his officers receive calls about residents smoking marijuana in their apartment complexes or near their children, they expect the police to take action.

“They expect us to respond in a way that addresses that concern,” he said. “I’m not sure issuing a civil summons and then departing is going to satisfy those citizens that frustrated by that situation.”

Dekmar said by decriminalizing the offense, it also makes it a lower priority, which will deprioritize the nature of the police department’s response.

The proposed change would make it similar to an open container violation, Dekmar said. The police department would be able to write a citation and after three tickets, it could be considered a misdemeanor.

“I understand the goal,” Dekmar said. “And I think that goal, potentially, can be achieved by handling this as a city ordinance violation, which would not create a criminal record because they wouldn’t be fingerprinted or book on those first three violations.”

Thornton has been clear that any ordinance passed by the council would not be a legalization of marijuana, but he also believes a small amount of possession shouldn’t result in an arrest or criminal record, which often hinders job opportunities in the future.

“I think everyone shares the goal in making sure people realize that this is not legalization and that marijuana still remains illegal,” Thornton said. “We’re just looking for ways to avoid arrests, bookings and criminal histories, but still offer some kind of meaningful punishment, but not crippling punishment.”

In a news release this past week by Thornton, he said those arrests disproportionately affect African Americans in LaGrange.

Dekmar said the numbers from the police department do suggest that Thornton’s claim is correct. However, the police chief also said the complaints received are also disproportionately from residents in the African American community.

According to documents from the police department, there have been 113 calls for service related to marijuana incidents since June 2018.

Thornton said another goal beyond ensuring those arrests don’t have long-term effects is to keep officers responding to serious offenses.

“We don’t want our officers spending a lot of time on what some consider to be low-level drug offenses, so that our officers’ time is devoted to more serious crime,” he said.

At the June 23 city council meeting, the council will have three choices. It can adopt the ordinance originally proposed by Thornton this past Tuesday, adopt the substitute ordinance with Dekmar’s suggestions or do nothing at all.

Also on Tuesday, Thornton said the council was in favor of two other ordinances brought forth by the mayor. City Attorney Jeff Told read a hate crime ordinance that would apply to local ordinance violations, such as disorderly conduct or damage to property. The other ordinance was a non-discrimination ordinance that will require all city employees, agencies and contractors to treat everyone equally.

Thornton also brought up the idea of the city council placing signage at the confederate memorial statue on New Franklin Road detailing the history of the statue. The city directed Communications and Marketing Manager Katie Van Schoor and Community Development Director Alton West to consult with local historians and come back to the council with a proposal of what the sign could look like. He said this would be a time-consuming process and would most likely take several months.

Thornton also floated the idea of hiring a community advocate to actively look for issues in the community, bring them to public awareness and find ways to address them.

Thornton said members of the council felt this was mostly the mayor and council’s role and would need more information about what that position would do. For now, that position has been put on hold.