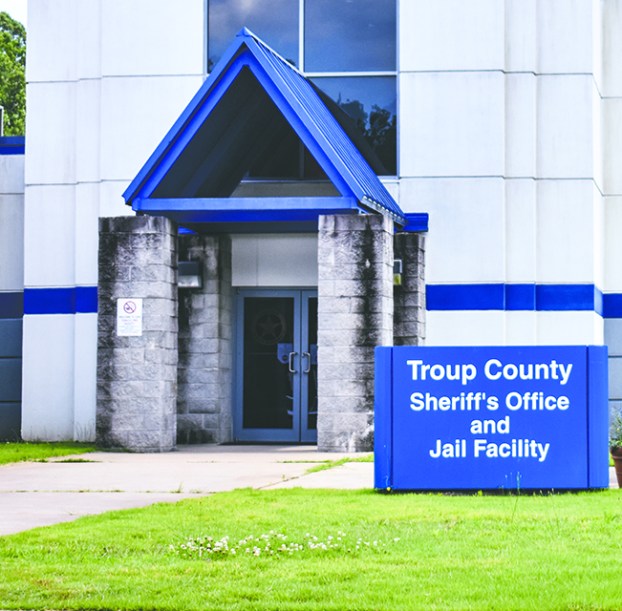 Above is the front of the Troup County Sheriff’s Office and Jail Facility. On Friday, the sheriff’s office said about two dozen inmates has tested positive for COVID-19. — Photo by Dustin Duncan

The Troup County Sheriff’s Office released a statement Friday afternoon stating there are approximately two dozen inmates at the Troup County Jail being monitored for COVID-19.

The news release did not specifically say how many inmates are being treated, noting that the number is subject to change due to some being released on bond or testing positive later.

“Our medical staff, WellStar West Georgia and the Department of Health are working hand in hand to try and keep everyone safe,” said Sheriff James Woodruff. “We are looking to the DPH and WellStar for guidance constantly.”

Public information Officer Sgt. Stewart Smith said that inmates with a positive test, those who are showing symptoms and those who have had close contact have all been isolated in separate housing units in our facility.

“All those inmates are being closely monitored by our dedicated jail and medical staff. We can assure you that our inmate population is receiving top notch medical care and no sickness complaint is overlooked,” Smith said in the news release. “Quarantining every inmate in a separate cell would be ideal. However, when we are responsible for over 450 inmates there is very little space for that and inmates also require classification based on their charges, making it impossible.”

According to the Troup County Sheriff’s Office, officers are taking several steps to mitigate the situation.

“We are monitoring our inmates daily,” said TCSO Chief Deputy Jon Whitney. “We have currently 419 inmates in the jail. We have issued cloth masks to every inmate, and we are taking those up and replacing those with a fresh mask at least three times a week.”

Whitney said that each inmate that has tested positive for COVID-19 is separated from the main facility and are moved to the jail annex.

“We have an infection control policy within the jail, and we’re making sure that our officers are aware of that and following it,” Whitney said. “We’re also doing some additional training.”

Whitney added that every inmate that asks to receive medical attention for any reason is being screened as well.

“We are monitoring consistently to see if any inmates are showing any symptoms,” Whitney said. “We meet with DPH once or twice a week, and even sometimes daily if something comes up. We’ve got the county manager involved. We also have WeCare, which is our medical provider.”

Whitney said no inmates that test positive for COVID-19 are placed in a cell with another healthy inmate.

“Nobody is leaving their cells,” Whitney said. “The only people leaving cells are people that are positive for the virus. We’re not putting positives in with people that aren’t positive.”

Additionally, in the past week a National Guard team from the 177th Brigade Engineer Battalion out of Statesboro, performed a deep clean of the inmate housing, booking areas and the visitation center of TCSO.

“We aren’t letting anybody just sit back there, and we are treating inmates appropriately,” Whitney said. “We are leaving it up to the medical staff. They’re upping their dosages of vitamin C for resistance against the virus and treating them based on CDC guidelines.”

Whitney said the jail has not seen a positive COVID-19 inmate with extreme symptoms.

“If they feel like they need to go to the hospital or anything, then we absolutely are taking them based off of the medical staff’s professional opinion,” Whitney said. “They are not put in the back and forgot about. They are being checked on and monitored. I understand people are going to question what we are doing, but we don’t have anything to hide and we are doing everything we are supposed to be doing based on what District 4 and the CDC is guiding us to do.”

COVID-19 appears to be spreading rapidly in Troup County, based on the latest numbers from the Georgia Department of Public... read more