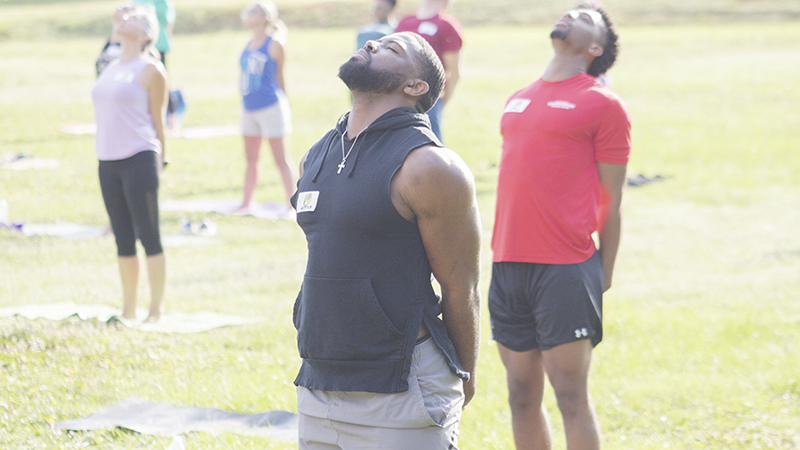 Locals participate in the yoga in the park event Saturday benefiting GetFed. — Photo by Jenna Oden

It was more than just a yoga session Saturday morning.

For the past four years, the group has continued to reach out to people throughout Troup County with both a listening ear and a hot meal.

“We’ve done all sorts of things to just try to make people realize that you are loved,” Boddie said.

Moore organized the event in less than two weeks after hearing Boddie speak about unity, actions against racism, police partnerships and GetFed at a roundtable discussion on June 1.

“It was amazing to see people be so generous and see everyone who came,” Moore said. “It was amazing to stand up there and see a field full of diversity in people. Afterwards there were so many people talking to each other, meeting new people and trying to find collaborations of how we can all work together to be a different LaGrange.”

Another founder of GetFed, Anthony Talley, said it was emotional to see everyone who came to the event.

“We all have a negative mindset when it comes to things, and I thought we might not see a lot of people come,” Talley said. “But not only are people out here, everyone is in wet grass, and we appreciate everyone. We are going to keep this thing going.”

Moore said it will take events like this to get people talking about racism and unity to help LaGrange and the country progress.

“We need to be able to hear each other, and the only way that happens is by having a conversation,” Moore said. “If we aren’t together, then that will never happen. So, I am so excited that this event went well, and it seemed everyone had a good time.”

Moore had never met Talley and Boddie until the morning of the event.

“You could just feel their realness,” Moore said. “They have a genuine want to make a difference. Hopefully, this money raised from the event will make an impact for them and help.”

Moore plans to host another yoga event in the fall.

To learn more about GetFed, visit the group on Facebook or email getfedfor1@gmail.com