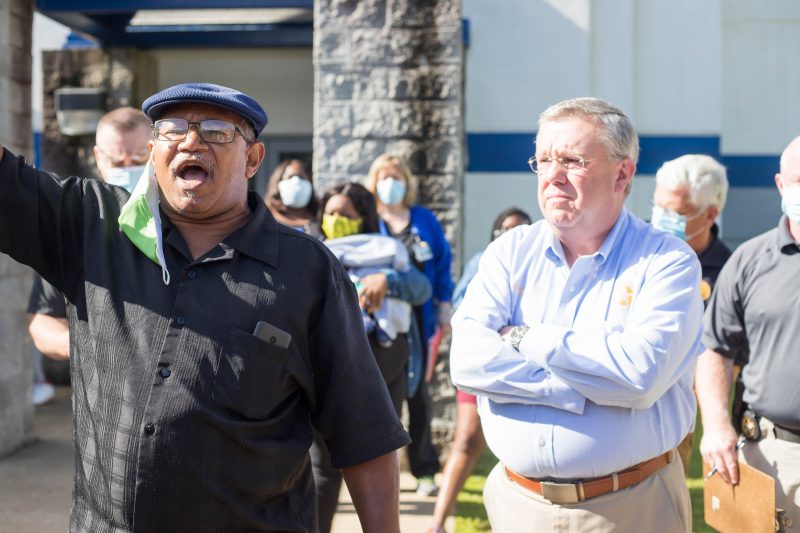 Bishop Jesse Adams with Heavenly Heights Church quiets a crowd of protesters at the Troup County Jail, so he can introduce Troup County Sheriff James Woodruff. Woodruff answered dozens of questions about the recent COVID-19 outbreak at the jail Wednesday morning.

Dozens of family members of those incarcerated at the Troup County Jail gathered Wednesday morning to demand answers from the sheriff about COVID-19 in the jail.

Sheriff James Woodruff said there are currently 25 inmates being treated for COVID-19 in the jail as of Wednesday morning. Woodruff said a total of 38 total inmates have tested positive since the beginning of the pandemic. Additionally, six jail employees are quarantining at home after testing positive for COVID-19.

“I think just like anywhere else in Georgia, especially in LaGrange, we have had an uptick in COVID cases,” Woodruff said. “These families are obviously very concerned and have come down to make sure their loved ones are okay. I have agreed to meet with them individually or as a group.”

Woodruff said he believes the virus was brought into the jail by someone who was asymptomatic and came through booking in the past month.

Woodruff said State Court Judge Jeannette Little is compiling a list of everyone with a misdemeanor charge at TCSO to see if they can be released early.

Woodruff said Georgia Department of Public Health District 4 will be coming to the jail to test every inmate for the virus.

“We are working to set that date. The hopeful, or the goal day right now, is Friday for jail testing,” said Amy Fenn, Georgia Department of Public Health District 4 Assistant Director. “We have to have a plan in place and public health is working with the county jail and the county officials to try and figure out what can we do with all these people once we [determine] who is positive because there is only so much space in the jail. So, we need to make sure that everyone is properly quarantined or housed.”

Fenn said after testing they hope to have results within 24 hours.

“We have had safety measures in place since this broke out in May,” Woodruff said. “We disinfected cells, we are getting them to medical as soon as we can and have offered masks out. As you know, we have to provide certain kinds of masks because certain type of masks they can make a weapon out of it. We can’t make them wear it.”

Woodruff said they are disinfecting the jail several times a day, and the national guard visited the jail recently and did a deep cleaning of each cell.

An inmate identified as Brandon Crawley, who has been incarcerated since January, spoke to The LaGrange Daily News over the phone and claimed he did not believe the jail was being cleaned properly.

“They aren’t using any chemicals to clean the dorms with,” Crawley said. “Officers aren’t practicing and using proper personal protective equipment. They just gave us masks last week, and we have been dealing with this since March. They are doing everything they can to keep everything covered up but not cleaning it right.”

Crawley said he believes that inmates who have COVID-19 are handling food for other inmates and working in the kitchen.

“There’s inmates that are sitting in medical right now with the virus with no medical care,” Crawley said. “We are sharing the same recreation yard that the people tested positive are using. They are giving us a mop bucket full of water, with no chemicals or bleach in it to clean.”

Woodruff addressed and answered dozens of questions from the crowd.

“We have four cells in the old jail on the hill that are dedicated for inmates that have tested positive for the virus, so we can get them away from the general population down here and monitor them up there,” Woodruff said when asked about where COVID-19 inmates are.

Suzy Woodie, who is one of the staff nurses at TCSO, said inmates testing positive are being given Tylenol as needed, symptoms are being as they come up and cells are being cleaned three times a day.

She added that if a pod of inmates is acting out, medical staff cannot safely check on the inmates.

“If the nature of the pod is deemed unsafe for the officers or the nurse, we do not proceed,” Woodie said.

Woodruff addressed the question of what precautions staff is taking when a new inmate is brought in.

Multiple people who were in attendance asked if inmates positive with the virus not receiving antibiotics.

“Antibiotics are not recommended for viruses,” Woodie said.

Woodruff announced that morning that anyone in attendance could have a special, one-time, ten-minute visitation with their incarcerated family members in the lawyer visiting room.

Tamela Hardnett, who was able to see her son, Torie Hardnett, Wednesday, got a call from WellStar West Georgia Medical Center telling her that he had tested positive for COVID-19.

“They have him in an isolation dorm away from the other inmates,” Hardnett said. “He was in a dorm with 10 to 20 other people who all tested positive. He was a dorm with other positives.”

Hardnett said her son was arrested in March and was healthy before getting arrested.

“He got it from the jail and was tested on Tuesday,” Hardnett said. “He was recently showing symptoms and that is why they tested him. They are giving him Tylenol and water.”

Bishop Jesse Adams from Heavenly Heights Church, who was helping facilitate the question and answer with the sheriff, said it is up to the families to hold the inmates responsible for their actions if they are released early.

“When they come home, you have to enforce rules,” Adams said. “Stay and do what is responsible. It is no good for us to fight for you and you get out here and do the same thing over. It is all in vain. It is up to you to do the right thing. If they let our children come home, it is up to you as parents to bite the bullet and tell them, ‘look, I stuck my neck out for you and you are going to do what’s right.’”

Adams encouraged the protestors to call or email the district attorney’s office to look into the charges and releases.

“We are moving forward, and are getting some of the demands we have asked for,” Adams said. “Let us continue to work diligently to do what we need to do, so it doesn’t just stop here today.”

-All inmates and staff be tested for COVID-19

-All non-violent inmates be released

-Proper care and treatment of infected inmates, and/or inmates to be taken seriously when they complain of being sick

-Thorough cleaning of the facility

Woodruff said he has no control over if an inmate is released or not.

It is not known at this time how long it will take Little to review every case or when inmates could be released.

Adams said he believed the protest and questions with the sheriff was successful.

“I do believe that we have the attention of the Troup County Sheriff’s Office, and also the other individuals that have a part in this situation,” Adams said. “I do believe we got some grounds of some things that we need accomplished. This is not the end. We are not just going to let it go. We are going to make sure we get our demands filled.”