Business owner shows desire to get involved in community 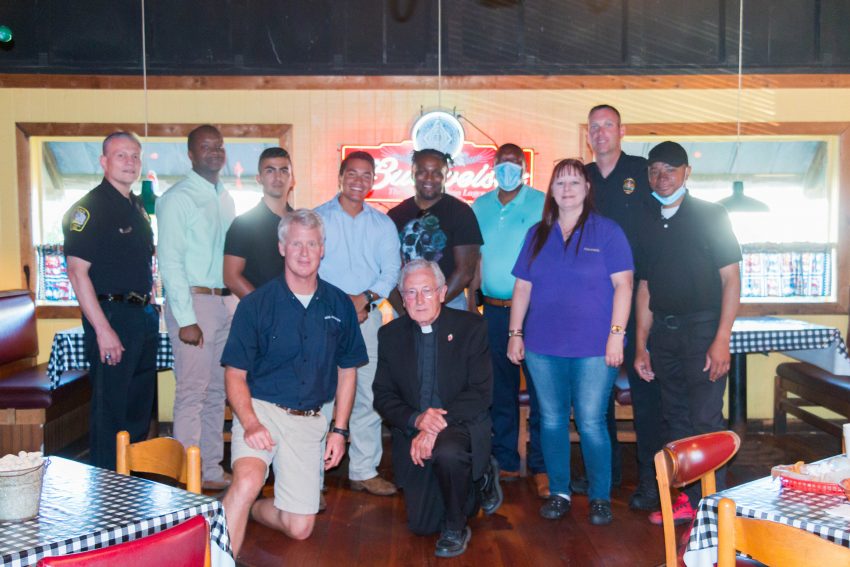 Hog Heaven owner Mike McCollum hosted members of the LaGrange Police Department, GetFed and Adaptive Growth and Cultural Advancement Organization (AGCAO) to discuss how they can all collaborate to help LaGrange.

“What can we do as a restaurant and as a team of folks to support your efforts in the community?” McCollum asked Anthony Talley and Leon Childs with GetFed and AGCAO. “What can we get to get police officers and the community out? You guys are getting out already in the community and grabbing people and talking to them.”

McCollum said he wanted to know more about what their organizations do and what’s going on in the LaGrange community when it comes to hunger, racism and more.

LPD Chief Lou Dekmar said he tries to help GetFed and AGCAO, and that they work together to help people when he can.

“If Leon needs something, he will call and ask,” Dekmar said. “He can call and ask who I know, and we can support them on getting them resources.”

“We have been able to get AGCAO a $5,000 donation to cover SAT testing,” Dekmar said.

Talley, Dekmar and Childs said their biggest struggle in finding help is from the churches.

“They will go on mission trips and feed hundreds of thousands of kids, when we have kids right here that are starving,” Talley said. “That’s where GetFed comes in. We walk the streets, we cook meals and take money out of our own pockets.”

Talley said they recently received two grants from Diverse Power and Walmart Distribution, but aside from those, GetFed relies on community donations to continue feeding.

“I’ll go to people who own businesses who I know and walk right in and ask for a $50 donation,” Talley said. “They’ll say, ‘well let me think about it.’ But they don’t have time to think about it because while they are thinking about it a kid is getting ready to go do something stupid to eat or feed his family.”

Talley said he sees people constantly selling drugs not to be ‘flashy’ but to feed their families.

“So many people say, ‘well get a job,’” Talley said. “How can they, when they have an eighth-grade education? It is a domino effect that spills over to the black community. Then, it spills over to the white community because you’ll have just as many white kids that are doing meth. Once they get in the system, nobody wants to touch them.”

The group discussed how churches go on mission trips to Honduras and other third world countries to fix up neighborhoods and houses, when LaGrange has communities that look the same.

Childs said when it comes to the students they work with, it’s about changing a mindset.

After hearing the whole discussion, McCollum said he wants to find a way to host events, feed people and find volunteers and mentors for the organizations.

“We are in the food business, so we can help,” McCollum said. “What we want to do is not be part of the people sitting on the couch watching this happen on TV. We want to be in full support of you.”

McCollum said he also wants to help LPD when it comes to bolstering their efforts of helping the community.

“These organizations need the support,” Dekmar said. “If you partner with them, you’re partnering with us. Our philosophy is that we expect the community to lead, not the police. The community knows what it needs and then they let us know how we can support them. These two are very good about letting us know.”

In the coming weeks, McCollum plans to come up with a plan that would involve Hog Heaven in helping the two organizations.