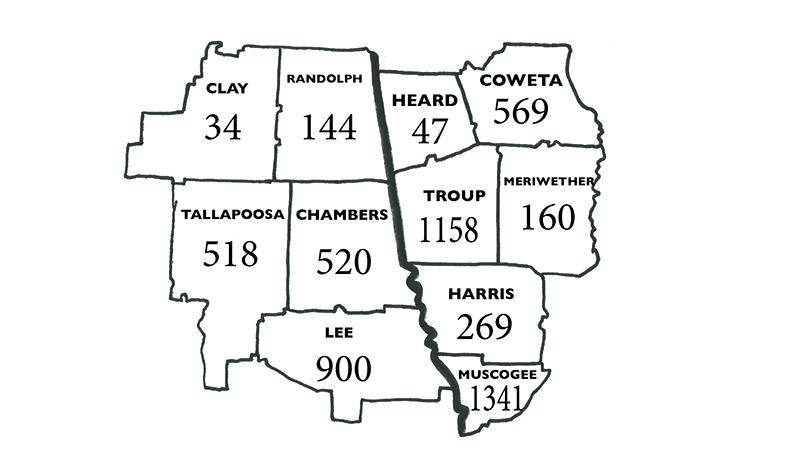 Results of the mass screening at the Troup County Jail came back on Tuesday, revealing that approximately one-fourth of inmates at the jail have contracted COVID-19.

Seventy-one inmates tested positive out of 316 tested on Friday, according to the Georgia Department of Public Health. There are also three pending cases.

A total of 21 inmates refused the test and 242 tested negative. There were 394 total inmates in the jail at the time, according to the Troup County Sheriff’s Office.

In all, 107 total inmates have tested positive at the jail since the beginning of COVID-19, but those inmates were not all in the jail at the same time.

The number of inmates in the jail fluctuate regularly, and some of those cases were from weeks ago.

The jail staff was also tested, with two out of 48 testing positive. One test was inconclusive, and GDPH said that test will be re-administered. Forty-five staff members tested negative.

“We are very thankful for the Georgia Department of Public Health for their continual guidance in this process as the health and well-being of the inmate population is our number one priority,” Woodruff said.

“We also want to take this time to encourage everyone to continue to practice social distancing and wearing a mask when in public.”

The jail numbers played a role in Troup County’s COVID-19 numbers increasing by 131 new cases to 1,158 on Tuesday. It was the first time The LaGrange Daily News has tracked an increase of more than 100 cases in a single day in Troup County.

The number of people hospitalized also increased to 120, and one more local person has died due to complications related to COVID-19.

The average age of people who have died in Troup County is now 58, and the median age is 74.

All but two of the deaths have been in people 57 and older, and most have occurred in people 70 years old and older.