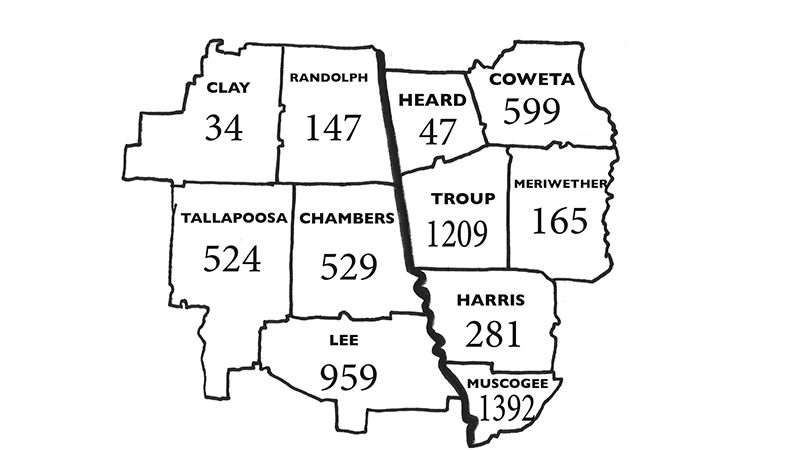 The number of COVID-19 cases in Troup County continued to rise on Wednesday, as the Georgia Department of Public Health reported 51 new cases in the county.

Troup County now has 1,209 total cases, and there have been 129 hospitalizations in the county. Those numbers reflect total numbers since the start of the COVID-19 pandemic.

“Among our 12 counties in District 4, Troup County in the last few weeks has been the highest number in daily increases,” Obasanjo said.

Troup County has had 783 new cases since June 7, an increase of 44 per day. There have been 29 deaths in Troup County.

Obasanjo said the key is getting to 60 percent mask usage in the county. He said that appears to be the number required to keep flattening the curve.

“One of the magic numbers that some of the data talks about is 60 percent,” Obasanjo said. “If we can get a 60 percent adoption of mask usage in the community … I think then we will begin to see a flattening.”

District 4 Public Health, Troup County, the City of LaGrange and numerous other organizations began handing out 64,000 masks to the community on Friday. Obasanjo said around 50,000 of those masks have already been given out.

“The response has been incredible in terms of accepting it,” Obasanjo said. “Now, let’s hope we adopt it.”

Of course, Obasanjo said he hopes to actually see a bending of the curve, meaning the number of new cases each day actually begins to go down.

Statewide, the age group with the highest number of COVID-19 cases is now in the 18 to 29 age group.

“The age of cases is coming down, statewide, not just in Troup County,” said Dr. Olugbenga O. Obasanjo, district 4 public health director. “The cases are getting younger. The young people are going out and doing what they have to do.”

Obasanjo said although young people are not typically the ones dying from COVID-19, there have still been serious cases in younger people. He warned young people to be careful and to continue social distancing and mask wearing.

“Young people feel invincible. I remember when I was young, you just felt that nothing could happen to you,” Obasanjo said. “I’ve been hypertensive since I was 22. If not for a lucky checkup at 22, I wouldn’t have known, so there are 20-year-olds who have conditions they don’t know, who get sick and could die. We have had people in Troup County in their 30s die.”

Obasanjo said even people who are asymptomatic may actually have some symptoms of COVID-19.

“Even the folks who are asymptomatic, they do have symptoms like loss of taste or smell but they are too young or too active to pay attention to it,” Obasanjo said. “Pay attention to your body. When you have those slight sniffles, get tested.”

GDPH is contacting people who have been in contact with people who have contacted COVID-19. Obasanjo asked that people take that contact tracing seriously and get tested if they are told they were around someone with a positive COVID-19 test.