LHS students receive a grant to kickstart their careers 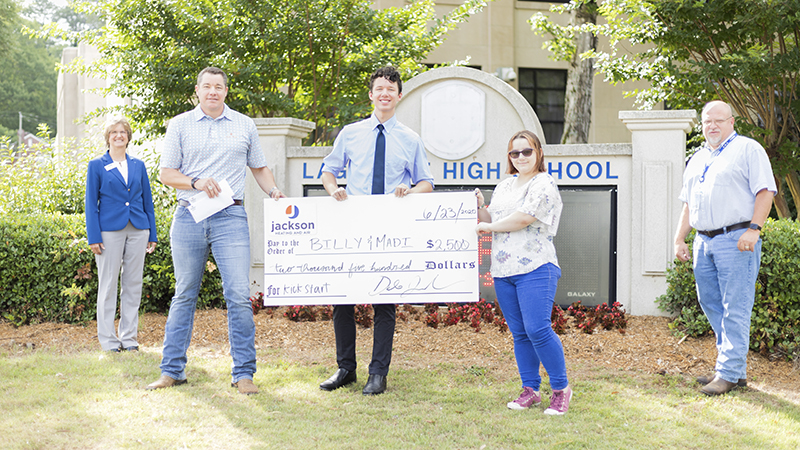 LaGrange High students Billy Fenn and Madi Morales received a Kick Start Your Career grant on Tuesday morning. The grant was organized by Jackson Services but numerous local businesses and organizations donated to the grant, which totaled $2500. Each student received $1250. --Jenna Oden

After facing devastating losses during their senior year, two LaGrange High students persevered and are getting the chance to attend college in the fall after securing scholarships and a new grant from Jackson Services called Kick Start Your Career.

“It’s a kick start grant to kick start whatever you need post-graduation, whether it’s college tuition, kick-starting a job, technical college or a down payment on an apartment or car,” said Jackson Services Co-Owner Dale Jackson. “We wanted to find a way to recognize students who aren’t always in the limelight and work behind the scenes volunteering in the community and aren’t necessarily maybe the valedictorian but are making an impact on the community still.”

Jackson said that after hearing their stories and the reasons for being nominated, Jackson Services could not let the opportunity pass without providing support for LHS graduates Billy Fenn and Madi Morales.

There was overwhelming support from the community to celebrate and encourage Morales and Fenn with donations from LaGrange Farmers Market, Kemp’s Carpet, George Middleton of Middleton Insurance, Mark Hubbard with Go Realty, Mare Sol, Country’s BBQ, Angie Jones with Go Realty and others who wished to remain anonymous.

After donations from Jackson Services and the other organizations, the total grant was $2,500 that will be split between the two students.

Fenn, who lost his mom in the past year, is headed to Kennesaw State University to major in computer science with a co-major in history.

Fenn said he is going to be a first-generation college student in his family.

“One of my friend’s dads reached out to me after my mom passed to see if there was any way he could help, and I never knew that it was going to end up being this big,” Fenn said. “I think me graduating college would really make my mom proud. She raised me all her life to try and get me to college. I am really just thankful for this opportunity.”

“Madi is an amazing kid,” said LHS drama teacher Randy Kemper. “She has been a stage manager for a couple of drama productions and has also performed in several shows. She has an incredible work ethic and an amazing attitude. There aren’t many individuals in the drama department that don’t love Madi.”

Along with her theatre commitments and classes, Morales juggled a job and personal life.

“I was very excited when I found out I was getting this,” Morales said. “I was just overwhelmed by it. It will help so much. Senior year was extremely difficult after going through a major loss in my family.”

Morales said going into her senior year she was pessimistic because she wouldn’t have that person to walk with her through her last year in high school.

“I wouldn’t have that person experiencing it with me,” Morales said. “I had to overcome that and keep working really, really hard because I know that’s what that person would have wanted.”

Morales said this was a really proud moment to receive help from local community members to help her excel after high school.