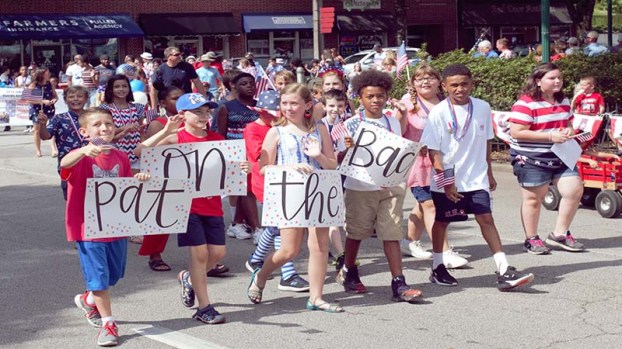 The 36th annual Sweet Land of Liberty Parade will be held virtually, frontline workers to be honored

The 36th annual Sweet Land of Liberty Parade will be held virtually Friday, July 4th on the City of LaGrange LGTV Facebook page www.facebook.com/lgtv.org. The 2020 parade will premiere at 10:00 a.m.

This year’s theme is “Star Spangled Everything.” The event will honor the community stars working on the frontlines during the pandemic including healthcare workers, grocery workers, truckers, sanitation workers, food preparers, delivery personnel and others who have continued to serve during this time.

The annual children’s parade is sponsored and staged by the Junior Service League of LaGrange.

“The theme is a nod to the National Anthem,” said JSL member and Parade Chairperson Amanda Trask, “The Star Spangled Banner always comes to mind when we think of patriotism and is something children are familiar with. We thought it would be fun for them to play off the idea of stars as they creatively salute our community heroes.”

The parade was founded in 1985 by JSL member, the late Annette Boyd. She was fiercely patriotic and affectionately known as the “Parade Lady.”

Only kids 19 and younger are allowed to participate and motorized vehicles are prohibited.  Participation is always free and open to the public.

To create this year’s parade the community was asked to post photos or videos to the JSL Virtual 4th of July Parade Facebook event page. LGTV, the city’s television station, put together the video of the virtual parade for the community. It will premiere Saturday, July 4th at 10:00 a.m. at www.facebook.com/lgtv.org.

Farewell parade held for McAlexander, who is retiring from LaGrange College

By Hunter Riggall Dozens of cars processed through the driveway in front of LaGrange College’s Lamar Dodd School of Art... read more