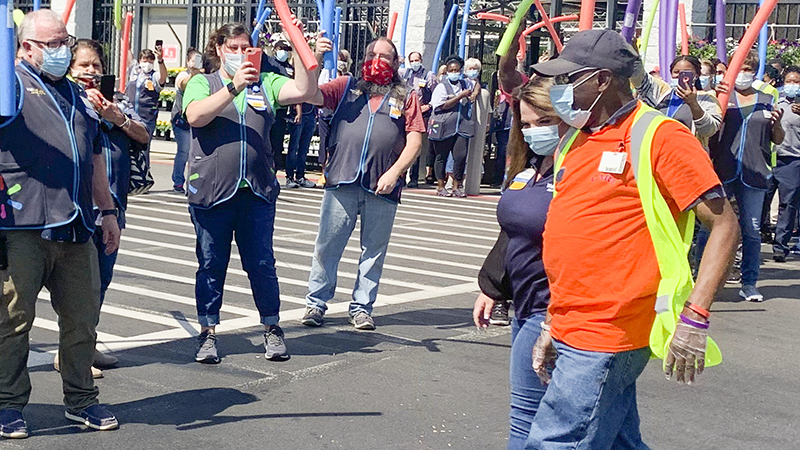 Carl Green was celebrated Monday afternoon for his 26th anniversary as an Walmart employee. — Photo by Grace Braswell

Carl Green, a longtime Walmart employee known in the community for his work ethic and kindness, died earlier this week.

Green worked as a stockman at the Walmart Supercenter on New Franklin Road for 26 years. His job included greeting and assisting customers, as well as moving and arranging shopping carts for easy access. Regular customers knew Green for assisting elderly customers and making people smile.

In early June, Green’s coworkers celebrated his 26th anniversary with the company, singing his praises and presenting gifts to him. Members of the LaGrange Fire Department attended and paraded fire trucks — Green had a love for the sirens.

Store manager Raven Sartain said the loss was devastating for her, as well as other employees and customers who knew Green.

“A lot of people grew up with Carl there,” Sartain said of longtime customers.

Sartain recalled Green’s upbeat personality that brightened the days of those around him.

“Every day of his life, he was in a great mood. He danced, he loved to greet people and he just loved to make people smile.” Sartain said. “We just loved him.”

She also spoke about Green’s remarkable memory. While he memorized the names of many customers, he often remembered small details about others, such as the car they drove, their children or an item they wore.

“People is what he loved … he had the best memory. It didn’t matter how long ago you met him, he remembered something about you,” she said.

Funeral arrangements will be announced by the Lakes-Dunson-Robertson Funeral Home. Additionally, the store will host a short memorial service for Green at the Walmart, Friday, June 3, at 11 a.m. The service will take place in the parking lot and be socially distanced. A Walmart employee who sings will perform, and a short sermon will be read.

LaGrange Mayor Jim Thornton confirmed on Tuesday that the city would be making a proclamation to commemorate Green’s life at the Walmart ceremony, but he was not certain that he would be able to be there in person.