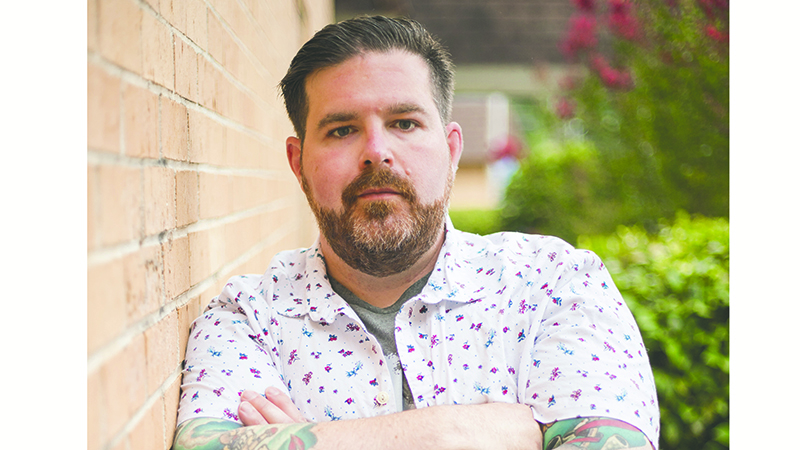 Earl Gordon Barnett has lived in LaGrange for 11 years, but the community didn’t feel like home until this past year.

The New York native is the host of “Hey, LaGrange,” the only podcast about the city and its residents. His first episode debuted on Oct. 29. The shows are released weekly, and Barnett is now up to 39. His interviews vary from local pastors, politicians, business owners and educators. His favorite and most popular interview was with the owners of Taqueria Estrella Roja on North Greenwood Street.

Barnett  38, started the podcast for two reasons — to connect with the community and to have a creative outlet following brain surgery in December 2014. On Good Friday of that year, the former educator was at Town Fitness working out on an elliptical machine when he had a seizure.

“I thought I had had a stroke, and so did the EMTs,” he said. “When I came back to consciousness, my speech was slurred.”

For six months, Barnett believed that seizures would be a part of his life. However, after a visit to Emory Hospital in Atlanta, he learned he had been misdiagnosed; he had a tumor the size of a small orange on the left frontal lobe of his brain. Doctors at Emory refused to operate, so Barnett sought a second opinion from the Duke Cancer Institute.

“Dr. (Allan) Friedman said he would be willing to operate,” Barnett said. “He said the doctors at Emory were full of hogwash.”

Friedman performed an awake craniotomy to remove the tumor:

“You go to sleep, they do the cut, then they wake up you, and show you a series of simple flashcards while cutting out pieces of your brain to make sure they don’t cut too much,” Barnett explained on the first episode of his podcast.

Following the surgery, Barnett could not talk, walk, or move the right side of his body.

“They thought I was paralyzed,” he said. “The only thing that gave them hope was that I still had feeling on my right side. I could wiggle my toes just a little bit.”

Barnett slowly regained his ability to walk and talk, but at first, he could only say “yes” or “no.” However, since Barnett is right-handed and the tumor was on the left hemisphere, he would answer incorrectly.

“I still get tripped up sometimes, but I’ve got workarounds when I feel like I’m going to trip up. I consciously start going for another word.”

Barnett uses a script for his interviews and edits out any long pauses before uploading his shows. Following his surgery, Barnett and his wife, Florrie, received an outpouring of support from their church family at St. Mark’s Episcopal:

“While I was recovering, Pat Barton and Mary Lou Dabbs and Octavis Smiley stayed and babysat me while my wife was working (at Creekside Intermediate School in Harris County).”

Recently, the Barnetts received good news from Dr. Friedman after his 6-month MRI: the cancer had not come back. However, Barnett knows that one day he will get a devastating report.

“Eventually, I’m going to get negative news, but you have to learn to roll with those punches,” he said. “I was paralyzed with fear the first couple of times (at Duke), but you can only live in fear for so long.”

The struggle has strengthened his family. Earl and Florrie have been married for 15 years and have two children — son Alastair, 5, and daughter Auden, 2.

“My family is ultimately stronger because of it, but it’s stronger through pain,” he said. “It’s like if you’re punched repeatedly and your skin toughens because of it.”

Therapy, his church family and his podcast have helped Barnett accept his new normal. Not only has the church supported the family during his recovery, but they also encourage Barnett with his podcast. Member Ginger Zachry offers suggestions for interview subjects.

The podcast also has changed Barnett’s relationship with LaGrange. He and his wife taught outside of Troup County before his diagnosis, so his home felt more like “just a place to sleep.”

“I feel so much more connected to the community of LaGrange now and connected to people specifically,” he said. “I’ve got so many more relationships where I can pick up the phone in a heartbeat, and they would be willing to help me, and I as well would help them.”

He and his wife met at Davis College in New York, where he received a bachelor’s degree in Bible and theology. He later earned his first master’s degree in theological studies from Emory University and his second in history education from Columbus State University.

“I was originally training to be a theology professor,” he said. “I was on track for an Ivy League Institution until the brain tumor. That’s when I had to (realign) my  expectations.”

He ends most episodes with “creativity takes courage,” a motto he tries to live by. In addition to his podcast, he is currently writing an autobiography that’s at 200 pages.

“There’s a certain risk in every creative endeavor, regardless of the size: big or small,” he said.

“I hope to inspire a tiny spark of creativity in each and every one who listens to my podcast. This is how I make the world a better place. It’s not earth shattering or groundbreaking; it’s just a guy and a microphone. But it’s what I’ve got, and I’m going to use it to the best of my ability for as long as I’m able. And when I can’t anymore, I’ll move on to the next thing because things go in seasons. Nothing lasts forever. That’s a fact that I learned the hard way from my brain tumor.”