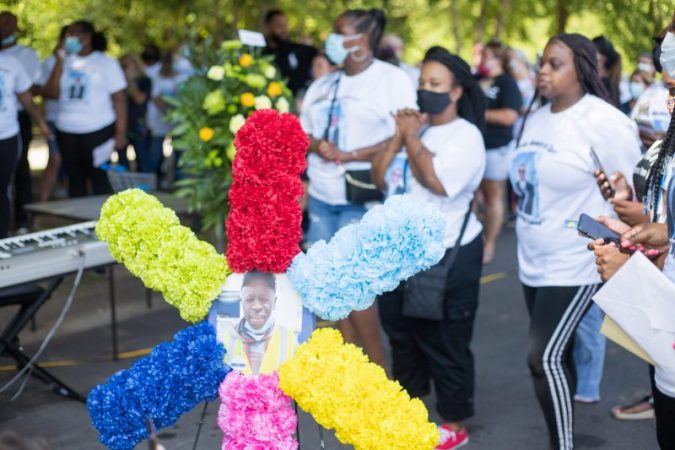 A long-time Walmart employee and beloved community member Carl Green recently died last week, but his life was celebrated by many Friday morning.

“As customers in the community enter those doors and Carl’s face may not be there, let them remember that his spirit lives on,” said the Rev. Mike Jackson. “… The first thing we can remember is his laugh. Can you remember his laugh? Nobody had a laugh like Carl.”

Jackson said Green never let the obstacles of life to deter who he was.

“If we could exemplify the life that Carl lived our world, our community can be a better place,” Jackson said. “Walmart was a better place because of the life of Carl. If you met Carl in the parking lot, your life was changed instantly.”

Green worked as a stockman at the Walmart Supercenter on New Franklin Road for 26 years. His job included greeting and assisting customers, as well as moving and arranging shopping carts for easy access.

Green had recently celebrated his 26th anniversary with Walmart at the beginning of June.

“Carl exemplified nothing but love,” Jackson said. “Carl loved everybody. No matter what your background was or where you came from.”

Dozens of Walmart employees, community members, family members, local law enforcement and more were in attendance Friday morning to celebrate the impact Green made on the lives of locals.

Green was celebrated on a local level and state level with two proclamations making July 3 “Carl Green Day” in LaGrange.

Throughout Green’s 26 years with Walmart, he remembered the names of most customers that came through the doors of the store.

Thronton said the family and Walmart team members should be proud of the impact Carl made on the community.

“People don’t remember the words you say to them, they remember how you made them feel,” Thornton said. “People were calling me because of the way he made them feel. That is a lasting legacy that we can all aspire to. We should all aspire to love like Carl.”

Walmart Store #614 presented Green’s family with his Walmart vest in a shadow box, and that presentation left many family members in tears.

As Green was honored with singing, dancing, flowers and kind words, the memorial finished with Green’s favorite things —sirens.

“Even though Carl is gone, he will live on through the community,” said Green’s sister Melody Huzzie Core. “I knew Carl was special because he was my brother, but it’s just awesome that people have come from all walks of life have come out to celebrate that. At the end of the day all I can say about Carl is, well done. He brought the community together and he just loved everybody. It is honor to be related to somebody that has touched so many people.”