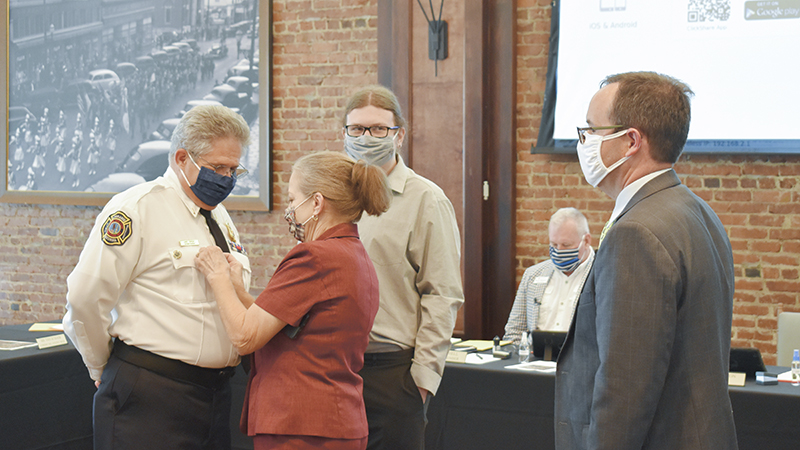 Ginny Ormsby attaches a pin to her husband, Jim, left, who was recognized for 30 years of service to the LaGrange Fire Department, as Mayor Jim Thornton, right, looks on. --Hunter Riggall

Lieutenant Jim Ormsby of the LaGrange Fire Department was honored at the LaGrange City Council meeting on July 14 for 30 years of service to the city.

Mayor Jim Thornton and LFD Chief John Brant thanked Ormsby for his work over the years and presented him with a 30-year service award.

Ormsby, who retired in March, thanked the city and its residents for making him and his family feel welcome, and for giving him and his wife Ginny a place to raise their three sons.

“I hope that throughout the years, in some way I’ve shown my sense of gratitude to the city and what they’ve provided me,” Ormsby told the council.

A native of Point Pleasant, New Jersey, Ormsby joined the U.S. Navy at 18. He worked on the flight deck of the USS Okinawa LPH-3 as a crew leader, and in 1980 participated in the Iranian rescue mission attempt, receiving the Navy Expeditionary Medal for his involvement.

It was during his naval service on the West Coast that Ormsby obtained firefighting training. After being honorably discharged in 1985, he was living in San Francisco. Ormsby visited his uncle and LaGrange local Jack Ormsby in the early 1980’s — he recalls going fishing on West Point Lake. Ormsby wanted a change from the big city, leading him to move here.

Ormsby joined the LFD in March 1990, with the help of the late former councilman Jim Hester. Over the years, he worked as a firefighter, sergeant, public safety officer and lieutenant. The recognition he’s received includes Rookie School Honor Graduate, Firefighter of the Year, multiple Life Saving Awards, unit citations and a Humane Society Rescue Award.

Ormsby has also received two letters of proclamations from two different mayors, as well as a congressional record document from U.S. Rep. Drew Ferguson and a letter of recognition from State Rep. Jeff Brown.

Recently, Ormsby was decorated with the Valor Award for Lifesaving at the 2019 Chamber of Commerce valor awards for providing medical assistance to a baby who was not breathing (the baby recovered). In 2018, Ormsby suffered minor smoke inhalation injuries from the house fire on Dix Street.

Other fires Ormsby has fought in his career include the Live Oak, Hinkle Jeep and Furniture Liquidators fires. Ormsby said how he was grateful for the support of the people of LaGrange in his various fundraising efforts. He’s helped raise funds for United Way, Harmony House and Wounded Warrior Project, among others.

“The community always seem to come through whenever I’d put anything together for those foundations,” Ormsby said.

Shortly after the 9/11 attacks, Ormsby and other LFD members flew to New York City, bringing with them cards and donations from LaGrange residents to give to various New York fire departments.

“That was big for me,” Ormsby said. “I’m from New Jersey, so that touched a spot.”

Ormsby returned to New York several times for memorial services, once bringing a Maltese cross (a common symbol for fire departments) made of flowers to lay at ground zero. The cross had been built by children at First Baptist Church. In normal times, Ormsby would have received a retirement dinner. Brant apologized for the unfortunate timing of his retirement, but Ormsby wasn’t too bothered.

“The most important thing for me was to address the mayor and the council and the city manager and thank them,” he said.

In his retirement, Ormsby is looking forward to spending more time with his family, especially his granddaughter, who will be one year old later this month. Ginny Ormsby plans to retire from her job with the U.S. Postal Service in January. The couple hopes to travel across the U.S., as well as visit Ireland, the Vatican City and Japan.

In the meantime, Ormsby continues to build handcrafted fishing rods, some of which are auctioned off to support the charities he works with.