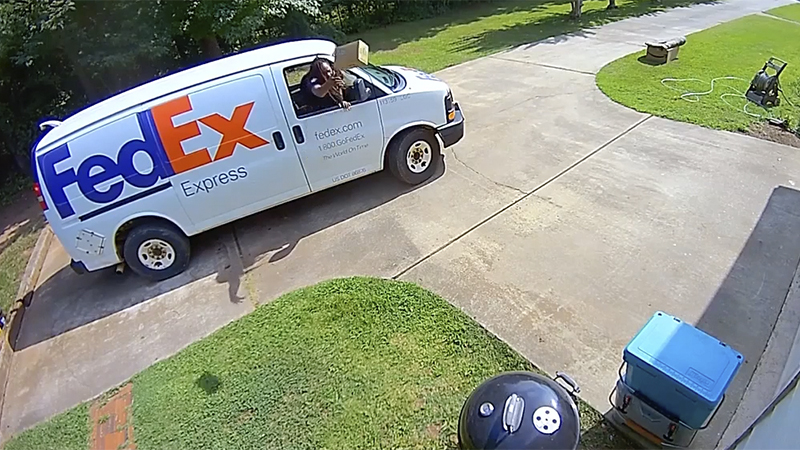 A viral video in LaGrange shows a FedEx driver tossing a package several feet out of a vehicle’s window, potentially damaging a brand-new iPhone from Verizon.

Jason Lawson and his wife were upset Tuesday when they saw footage from their Ring security video, which shows the FedEx driver pull up to their house, back up, roll down the vehicle’s window and throw the box toward the Lawson’s house. The throw appears to have been from at least 10 feet away.

The video doesn’t show the driver getting out of the vehicle at any point during the delivery.

Lawson said he immediately reached out to FedEx and sent the company the video.

He said he spoke to FedEx officials at the local office and at the company’s corporate office, who said they’d call him back with a solution.

Lawson said he told them he’d wait to post the video, so that they could work out a solution.

However, when he didn’t get a return phone call, he decided to post the video on social media.

As of Thursday, the video had been watched more than 13,000 times.

“If there is going to be an article, it should be centered on the company caring for their customer and doing the right thing to make things right when a mistake happens,” Lawson said. “Mistakes happen all the time. Every company has good and poor employees. It’s just across the board … I’m big on customer service and caring for customers. FedEx had the opportunity to fix it, and nothing would have happened. But they didn’t.”

Lawson said he had no ill will toward the driver in the video. He was just disappointed in FedEx’s customer service in response.

“FedEx holds its team members to a high standard of conduct and takes the security of our customers’ shipments seriously,” the company said in a statement to The LaGrange Daily News. “The images in this video are disturbing. We are conducting an internal investigation and will take appropriate action. We are also in contact with the customer and are working with them to resolve the issue.”

Lawson said he emailed Verizon’s CEO late Wednesday evening and got a response quickly. He said Verizon is completely replacing the phone with a brand-new iPhone and is allowing the Lawsons to keep the phone that FedEx delivered.

“So, all I have to do, or my wife has to do, is go up there and get the new phone, and she’s done,” Lawson said. “And that’s all I asked FedEx to do. Straighten out the situation, so it doesn’t affect me. They told me they would, and they didn’t. That’s why in the video [description], it says they don’t care. Because they said nice things. They made nice warm, touching comments. But when it came to actually doing what they said they were going to do, they didn’t care enough to do that.”