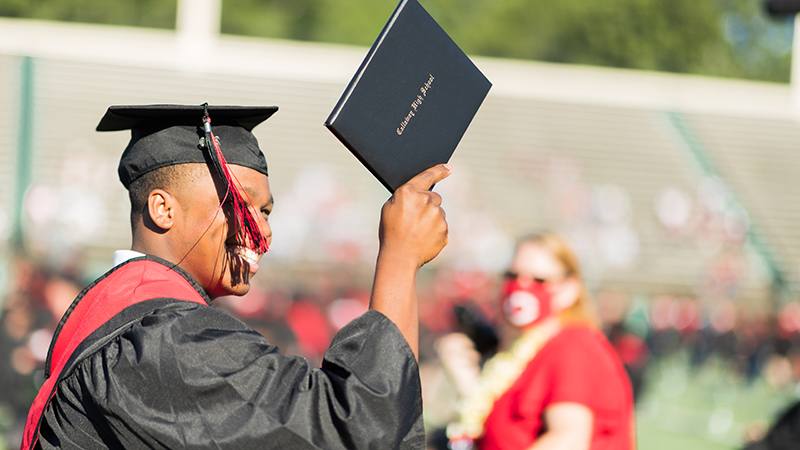 Months after their last exams, papers and projects wrapped up, the graduating seniors of Callaway High School finally had the chance to graduate in-person at Callaway Stadium on Thursday.

Approximately 400-500 friends and family spread out across both sides of the stadium to watch the graduates be recognized, walk across the stage and receive their diploma. Though the event program listed 204 candidates for graduation, some graduates did not attend the belated commencement ceremony.

TCSS worked with District 4 Public Health to plan the ceremony and establish safety guidelines. Face masks were highly encouraged, and most attendees wore them. Four non-transferable tickets were provided for each graduate’s friends and family, with tickets required for entry.

Also upon entry, attendees had their temperatures checked and had to return a completed health questionnaire that was distributed with the tickets. Two onsite medical tents were also present. The attendees sat together in groups while maintaining distance from other families.

TCSS had postponed in-person ceremonies in early May, holding virtual ceremonies on June 15.

The ceremony was opened by Zoe McGraw, class president for the Class of 2020. She introduced Angel Jennings, another graduate, who sung the national anthem.

Callaway Principal Jonathan Laney took the stage to praise the Class of 2020 for facing the challenges of COVID-19 head-on. His speech touched on themes of overcoming adversity and being a stronger person for it, something every speaker mentioned.

“In the day of prosperity, rejoice, in the day of adversity, consider: God has made one as well as the other,” Laney said, quoting Ecclesiastes 7:14. “Although things are still far from normal, this morning we are together once again as a Cavalier family. And for that, it is certainly time to rejoice.”

Laney also commemorated the life of Dylan Norvell, the Callaway graduating senior who was killed in a car crash in April.

McGraw, as well as Valedictorian Jared Nation and Salutatorian Dylan Almon, thanked the LaGrange community, namely the parents, teachers and staff of Callaway High School, for their support during this unusual time.

Almon said students in the class of 2020 “came into the world during a chaotic time,” comparing the upheaval caused by COVID-19 to the 9/11 attacks.

He lamented the loss of senior traditions such as senior sports moments, senior field day, senior skip days, honors day and the last days of school. But he also said that overcoming obstacles would make the payoff better.

Superintendent Brian Shumate, as a former high school principal, said he understood seniors’ pain in missing out on senior activities, but echoed the other speakers in saying that people are defined by how they perform under adversity.

“We’re all going to be thrown curveballs in our lives,” Shumate said. “And people will judge based on how you personally navigate the world as it changes around you.”

Nation said the challenges of the pandemic, and life in general, were far from over.

“We’ve gone through a lot in the past few months, but we made it,” Nation said. “I was told I had to speak about the future today, but I’d be lying if I told you the struggles are over now that you’ve graduated. It’s going to be rough … But we have to keep going.”

Emphasizing the importance of the five years after high school graduation, Shumate advised graduates to work on self-development, building relationships and acquiring as much education and training as they could in that time.

Shumate called upon the parents in the crowd to assist their kids as they move on to college, the workforce, the military or other paths.

“Parents, your jobs are not over today,” he said. “Trust me. I have kids in their twenties, and I’m still raising them.”

Nation told the graduates to live every day like it was their last, because “the only constant in this world is change,” evidenced by the last few months.

“Be bold. Do great things that matter. Go forth and conquer,” Nation said. “You don’t have to conquer the whole world, or even your entire life, all at once. Just conquer each day, one at a time.”