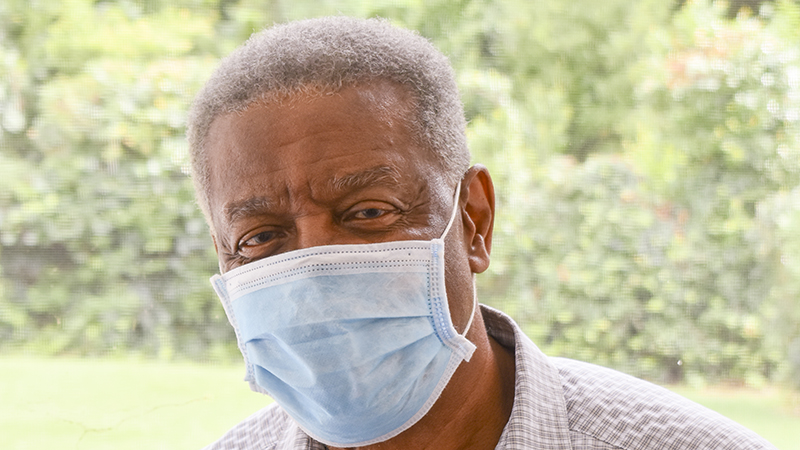 Robert Tucker had lived in metro Atlanta for 52 years when, in 2012, he came home to LaGrange. Visiting the neighborhoods where he grew up, he didn’t like what he saw.

“I got back and looked around and things was in disarray … it was not a pretty sight,” Tucker said, sitting on the back porch of his mother’s home on Ware Street.

Tucker turned 78 years old on Friday. He’s the eighth of 13 children. In 1960, he graduated from East Depot High School and left town to attend Morehouse College, earning a bachelor’s degree in mathematics.

After a stint at Lockheed Martin, he went into education, working for the DeKalb County School District for 40 years. Tucker worked as an elementary school teacher, principal and assistant superintendent, picking up a PhD in education from Clark Atlanta University along the way.

Before he restored and moved into that house, he had opted for a quieter, more bucolic setting for his retirement.

“I did what everyone else would do — I bought a house out on the lake,” Tucker said. “And I was going to go out in my old age and kick back and enjoy it.”

Something didn’t sit right with him, however. The house on the lake was too similar to the home he had left up in Buford. It was too quiet. Now settled in the fixed-up family heirloom, he appreciates his mother’s house for being near the hustle and bustle of inner-city living.

Tucker didn’t just want a nice home, though. He wanted to fix up the neighborhood surrounding it.

The home is located in Calumet Park, a neighborhood bordered by Morgan Street and the train tracks to the West, by Greenville Street to the North, by East Depot Street to the South and by Render Street to the East.

The neighborhood is named for Calumet Park, located on Union Street. The park, in turn, is named for the historic Calumet Village, Troup County Historian Clark Johnson explained in an interview. The area now referred to as Calumet Park used to be considered several smaller neighborhoods, or collectively, East LaGrange.

Calumet Village consisted of mill homes for workers of a mill that operated at the current site of St. Peter’s Catholic Church from 1889 until 1982. The mill operated under several names, including LaGrange Cotton Mills, and was bought by Cason Callaway in 1928. Callaway changed the name to Calumet Mill and, with his brother, Fuller Jr., brought it into the larger Callaway chain of mills in 1932.

The village was on Addie and McGee streets, which Tucker now says are the most blighted streets in the neighborhood. Johnson said they’re also the oldest houses in the area.

Tucker’s neighborhood was always a poorer part of town, but he thinks something changed during the time he was gone.

“Values were different. You had families in here … over the years the family structure changed. And so goes the neighborhood, because you don’t have that leadership,” Tucker said.

Tucker believes Lafayette Parkway and Morgan Street cut off the area from the rest of town. He also laments the loss of his old high school, which he said was a focal point for residents.

Johnson said the decline came in the 1960s and 1970s when rentals started outpacing resident-owned housing. The mill housing had been sold to its workers, who eventually left the area and sold them to landlords.

“The completion of Lafayette Parkway and widening of Morgan Street sort of isolated the area and neighborhood stores lost patronage to big box stores,” Johnson said. “Dr. Tucker has made great inroads in revitalizing the neighborhood … and is to be applauded greatly.”

The neighborhood is located in U.S. census tract 9606, which also includes most of the land south of Lafayette Parkway and north of Colquitt Street/Upper Big Springs Road, and extends east out to the Merriweather County line. Census estimates put the median household income in the tract at $30,938 and the poverty rate at 24%. Those numbers are $55,679 and 14.3%, respectively, for Georgia as a whole.

Tucker recalls that one day, after moving back, he was talking to a neighbor who, every day, ventured 1.5 miles over to Granger Park every day to take his walk. Tucker was bemused.

“I asked him, ‘Why in the world you go way over there?’” Tucker said.

The neighbor told him that Granger Park was in better shape and safer than the park around the corner.

“Why don’t we make it so you will want to go down there?” Tucker asked his neighbor.

That conversation was the spark for Tucker to do something.

They’ve had assistance over the years from the Callaway Foundation, which financed enhancements made to the eponymous park, including the popular splash pad, which is currently closed due to the pandemic.

Despite its small size, Calumet Park is home to nine churches. Some of those, such as Warren Temple UMC and Greater Faith Church of Christ, regularly work with the CPNA. Tucker also praised LaGrange College’s Servant Scholars program, along with Ark Refuge Ministries, for providing labor for service projects. Other partners include Hills and Dales Estate, LaGrange Farmer’s Market, the Chamber of Commerce and Georgia Conservancy. Tucker said the partnerships are “phenomenal.”

Those are the ones the CPNA works to restore and enhance. Others are abandoned, may have asbestos and fire or water damage. CPNA works with the city to try and get those removed. Property liens on the property, asbestos abatement and uncooperative property owners can drag out the process. Sometimes it takes years to get rid of an abandoned house.

The CPNA has received $125,000 housing grants from the Callaway Foundation for two years running. These and other, smaller housing grants have helped them paint and put roofs on houses, as well as repair floors, walls and doors.

The goal is for restored houses to be available for $90,000 or less, and to provide assistance for people to improve their credit. The ultimate goal is for more of the residents to become homeowners instead of renting.

One of the biggest issues for residents is reducing crime. One incident that still lingers in residents’ minds occurred in 2013, when seven people were shot and injured during a large gathering at Calumet Park, believed to be a gang incident.

In February, the community was shaken by a shooting that left beloved shop owner Pat Underwood dead. The 78-year-old year old woman was killed by a stray bullet from a shootout that entered through the window of her corner store.

Calumet Park residents held a candlelight vigil and placed flowers at the door of her store, which has been closed ever since.

Tucker hopes to build a community garden in Underwood’s memory at 601 Hines Street, with the blessing of the property’s owner, businessman Carter Kimble. Work had started on the garden but stopped when the pandemic hit.

Tucker’s vision for the store, still owned by Underwood’s son, is an internet cafe where children can congregate and do their homework.

Though part of The Thread winds through the eastern part of the neighborhood, it stops at Calumet Park. Originally supposed to continue west, in 2019, after two shootings, Tucker and other community leaders recommended construction be paused, saying the area was too dangerous.

A job training program is still in the planning stages. Tucker believes the biggest obstacle is not getting jobs, but keeping them. They need soft skills — getting to work on time, getting along with supervisors etc.

“There are a lot of jobs. But the skillset, there’s a mismatch,” Tucker said, adding that soft skills like showing up on time and getting along with supervisors are part of the problem.

Tucker has attended economic development meetings where he was surprised to see a disconnect between development in town and what was happening in his neighborhood.

“We talk about economic development and how the city’s making a lot of progress and bringing all of these industries and businesses in here,” he said. “And I’d sit there and say, that doesn’t apply to my neighborhood.”

If Tucker’s vision for the area becomes a reality, it could present another threat — gentrification. When a neighborhood is on the rise, property taxes and rents tend to go up, forcing out longtime residents and chipping away at the local character. Tucker expects that, and says he and his neighbors are prepared to fight it.

CPNA discourages investors from coming in and buying housing, preferring to arrange sales of blighted housing to permanent residents, or fixing up existing properties. They hope to keep the property footprints small. The neighborhood successfully lobbied against the building of a car wash in the area a few years ago, which Tucker mentions as evidence they can intervene when they want.

The vision is for residents to be families that are mixed-income, mixed-education level and invested in the community long-term.

Tucker said if a developer selected a large plot to develop several units as a subdivision, he might consider supporting it to “throw them a bone.”

“Money talks and you won’t be able to control it all,” he said. But if the neighborhood is engaged and organized, they can exert their input on local government.

“Sustainable change must start from inside,” Tucker said. “People that are impacted by it have got to buy in, they’ve got to own it … they’ve got to know this is where I live, this is mine and I have to protect it.”

There’s a long way to go for the neighborhood, but Tucker remains hopeful.

“I’m a spiritual person. … People often say ‘What in the world you trying do over there? You’re not going to make it,’” Tucker said. “I often think of Noah, when he built that ark. And there was no water … but he built that ark, knowing it was going to come.”