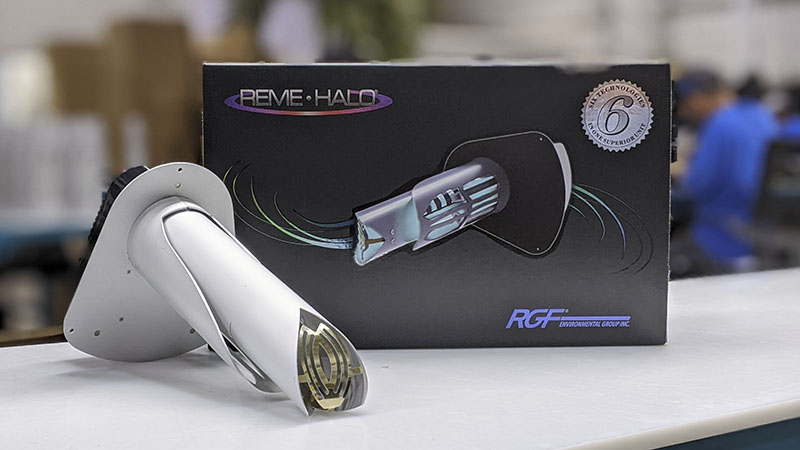 A REME Halo air purifier device sits on a counter on display.

HVAC companies in Troup County have seen customers more interested than ever in air purification systems amid the COVID-19 pandemic.

Schools, office buildings, stores and residences have been fitted with devices or had their systems modified.

Dale Jackson, co-owner of Jackson Services, said his company has installed air purifiers at several Troup County School System schools, as well as Lafayette Christian School. Jackson Services has also been working to install such products in residences, as well as in higher risk environments such as dentist offices and restaurants.

“They’re wanting their customers to feel safe to come back in their office,” Jackson said, adding that businesses who don’t regularly deal with customers also have been purchasing products to make their employees feel safe.

Jackson said interest among customers, as well as general awareness around air quality, has increased dramatically since the start of the pandemic.

“We can’t hardly keep them [purifiers] in stock,” Jackson said. “The industry is having to fight over them.”

The REME HALO is an active, not passive, device, meaning that instead of purifying air that passes through the unit, it produces and expels hydrogen peroxide molecules to attach to particles in the air and destroy them.

Robyn Griffin of ACE Air said their firm primarily works with residential clients, and thus has been installing purification devices in homes across LaGrange. ACE Air also works on small commercial spaces such as small offices and stores. Also available are portable purifiers, which Griffin said can be used by travelers to use in hotels and other temporary spaces.

Griffin said sales for the company have tripled this year, and that the average cost for whole house system installation is about $800.

ACE has used devices that feature ActivePure technology, which draws upon NASA technology in its design. According to one NASA Technology Transfer Program news release, an ActivePure device, the Aerus Air Scrubber, has been shown to reduce an indoor environment’s presence of viruses, such as Swine Flu and Bird Flu, by 99% over 24 hours. The Air Scrubber is similar to the REME HALO in that it uses UV light to create charged ions.

The maker of the REME HALO, RGF Environmental Group, said the product has reduced similar coronaviruses by 99%. Jackson Services previously created a chamber where the device was used, along with UV light, to disinfect masks. The company that produce the iWave air purifier, another device sold by ACE, found that, in a controlled test chamber, their products reduced the presence of other coronaviruses by 90% after 60 minutes.

Griffin said the range of products, some designed for large commercial spaces and others designed for smaller residences, all operate in similar ways.

“They’re all the same tech, but some have a better price point,” Griffin said.

Even though ACE Air is installing products that may reduce COVID-19 transmission, the company’s employees still have to consider safety when installing these devices.

“We certainly comply with the CDC guidelines when going into someone’s home,” Griffin said, adding that technicians wear masks, have their temperatures checked regularly and that ACE sanitizes vans. Jackson said his company also has “rigorous” procedures for technicians going inside to install products.

The effects of ion generating air purifiers in preventing COVID-19 spread is debated, but they also have other benefits, such as deodorizing, as well as removing bacteria, dirt, dust and allergens such as dander and pollen from the air.

The U.S. Environmental Protection Agency does not certify air cleaning devices, but says on its website that under some conditions “ion generators and other ozone generating air cleaners can produce levels of [ozone] significantly above levels thought harmful to human health.”

“The rest of it’s all gimmicks. The HEPA filter will trap everything,” Marr said.

Marr acknowledge that active air purifiers may provide more virus-killing capacity but also expressed concern about ionizers producing ozone as a byproduct, and some products’ use of hydrogen peroxide.

“We have to make sure we’re not harming ourselves with what we’re putting into the air,” Marr said.

Jackson said the hydrogen peroxide is necessary for neutralizing the virus, and that the amount of ozone created is “at very low levels.” Jackson also said the ozone levels can be adjusted for more sensitive individuals.