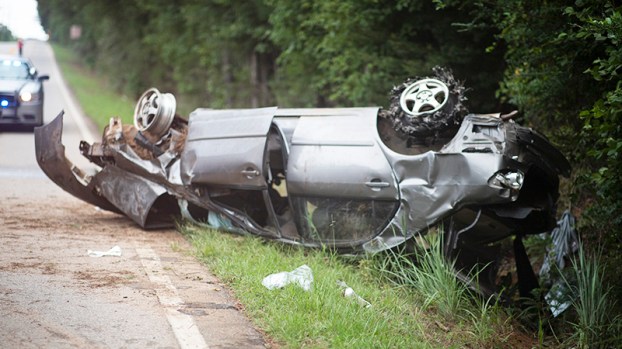 An 18 year old LaGrange man identified as Percy Rivera, crashed his car twice within a one-mile stretch of Hogansville Road Thursday morning and was sent to Grady Hospital in Atlanta with severe injuries.

According to Sgt. Scott Jeter with Georgia State Patrol, the driver was thrown from his car in a one-vehicle accident on Hogansville Road, less than a mile from Shallow Creek Lane.

The vehicle had flipped in the accident, but Jeter said somehow the car flipped back on its wheels and witnesses saw the driver get back in the vehicle and drive away.

Shortly after, the same vehicle was involved in a second one-vehicle accident on Hogansville Road near Shallow Creek Lane.  Jeter said for the second accident the vehicle had lost some tires and was running on several rims. When the driver tried to go around a curb, the vehicle flipped and crashed into a ditch.

The Troup County Fire Department had to extricate the driver from the vehicle.

Jeter said Rivera’s mother told investigators that Rivera was supposed to be heading to work in Grantville Thursday morning.

Jeter said it was unclear at this time if alcohol or drugs played a factor in the accidents.

No other vehicles were involved in the accidents.

The LaGrange Police Department said in a press release earlier this month that they received 172 calls for service regarding... read more