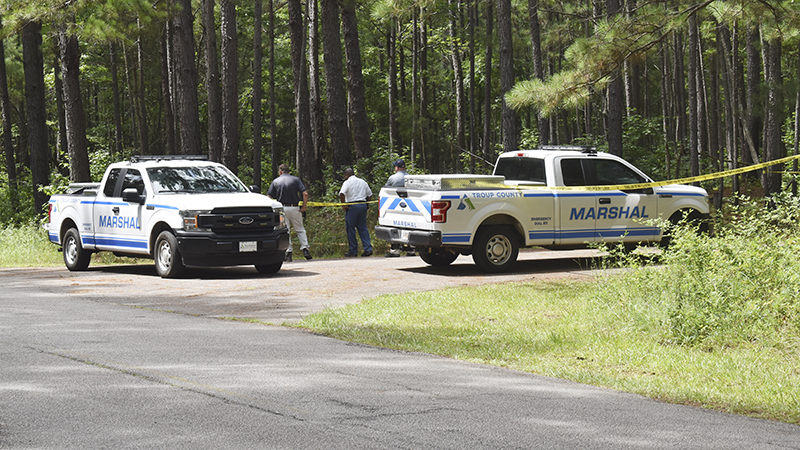 A deputy marshal with the Troup County Marshal’s Office is recovering after being shot in the arm Wednesday afternoon at Glass Bridge Park.

The incident began when the marshal’s office was dispatched to Glass Bridge Park around 1:22 p.m. in reference to a man who had been bitten by a dark grey pit bull. According to County Manager Eric Mosley, the pit bull was dragging a leash and a collar.

GBI said deputy marshals met with the complainant, who had a bite wound to the leg.

The deputy marshals began canvassing the area in search of the pit bull, and one observed the dog and exited his vehicle. The deputy marshal retrieved a dart gun and shot the dog with the dart to subdue it, according to GBI. Mosley said the tranquilizer gun had no effect.

The pit bull fled and deputy marshals began tracking the dog through the woods.

Mosley said they believe the pit bull was struck by several shots before running off. Several deputy marshals attempted to locate the dog, but he had not been found as of Thursday morning.

Mosley said the dog is extremely dangerous and aggressive, so if someone finds him alive they should call 911. Mosley said not to approach the animal.

“The officer is recovering well, and we are extremely grateful for the overall quick response of medical units to aid in the care of the officer,” Mosley said. “We believe that the officer will be released as early as today from Grady Hospital in Atlanta. At this time, our thoughts and prayers are with the officer and their family.”

Mosley said if the dog is located and the owner can be determined there are likely county code violations and possible charges pending.

GBI said the investigation is active and ongoing.