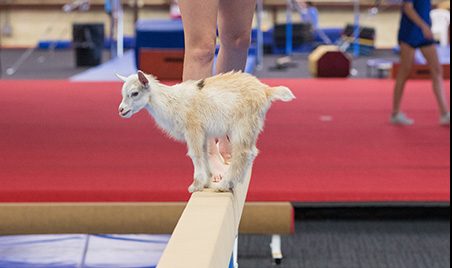 Tumble Town 2 gymnast Ashlyn Harrelson poses for a photo with the newest and smallest gym member, Tiny the goat.

Tumble Town 2 has taught dancers and gymnasts of all shapes, sizes and backgrounds over the years, but they’ve never had a four-legged student. Until now.

Gym Owner and Head Instructor Angela Anderson said Pattie Harrelson, a gym teach coach at TT2, recently adopted a miniature goat. Anderson knew that she had to somehow incorporate the animal into practices.

“I just thought it’d be really fun to bring the goat to see everybody,” Harrelson said. “As soon we put him on the floor, he started running alongside them like it was normal. He’ll hop and skip, and now he has found out how to climb the stairs and walk the across the beam and jump down like a gymnast. It has been just so fun and hilarious to watch.”

Anderson said a few weeks ago she started making it normal for “Tiny” the goat to come by the gym regularly.

“I was having a really rough day and I asked Pattie to bring Tiny by to bring some happiness and laughter to my day,” Anderson said. “I told her I needed some emotional support from Tiny. Now, she has truly brought emotional support to the gym.”

Tiny now comes to Tumble Town three times a week with Harrelson and her daughter.

“We have had some really bad thunderstorms come through LaGrange recently and you know we have little ones here, and they’ll get scared and scream when thunder hits,” Harrelson said. “I’ll pull Tiny out, and it’ll provide a healthy distraction and make them feel better. It’s crazy because Tiny has just become this therapy goat for everyone.”

One gymnast recently injured their foot, so instead of sitting there watching everyone else be able to train, that student gets to hold, feed and walk Tiny.

“Of course, everyone flipped when Pattie brought Tiny the first time,” Anderson said. “Now, everyone knows Tiny is here, and they aren’t distracted by him. When Tiny needs to be a distraction for them, he can be. It has provided fun and relief at times.”

Harrelson adopted Tiny after a breeder reached out to her. Tiny’s mom and other siblings all had died.

She took Tiny in to help but decided to adopt him and add him to her farm.

“We are kickstarting a new adventure on our farm with Tiny,” Harrelson said. “We want to start breading Nigerian miniature goats. Tiny is just a small addition to our farm of goats, pigs, chickens and more.”

After college, Anderson opened the original Tumble Town, where it was successful for more than a decade. She then moved to Utah for a few years to teach tumbling and dance there. After moving back to her roots of LaGrange, she opened TT2 four years ago.

When the pandemic hit, Anderson, like many others, had to close their doors. About four weeks ago, Tumble Town rolled out the mats, sanitized the beams and bars and reopened for students to get back to work.

“We are moving slow and cautiously,” Anderson said. “We are being very careful as we continue to navigate through all of this.”

For precautionary measures, all students have to sanitize their hands and feet before entering the gym.

They have their temperature checked upon entering the gym and then every 30 minutes they are there. Anderson also made masks optional for students.

She said they are optional because it could possibly move while a student is doing a flip or on the beam and cover their eyes, which could cause serious injury if they can’t see what they are doing.

She said all students have to stay six feet apart from each other and the only person close to a student can be a coach.

“We have had a lot of good responses to everything,” Anderson said.