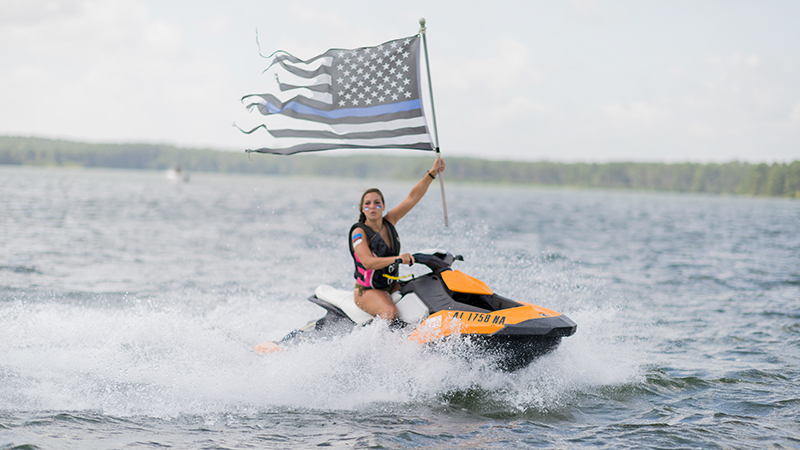 A jet skier holds a blue line flag in support of law enforcement Saturday at the back the blue boat parade.

Over the weekend, hundreds of boats filled West Point Lake to show their support for local law enforcement officers at an American pride and back the blue boat parade.

Event organizer Keith Winders said when he first made the event on the Facebook page West Point Lake Life, he only expected 30 or so boats to come.

“Even though there were more than about 250 boats behind us, I think there were closer to 400 boats out there,” Winders said. “As we were going upstream toward Highland Marina, more boats were coming out toward us to get in line in the parade. They were coming out of every cove.”

Winders said he came up with the idea a few weeks ago after a few of his friends mentioned they wish they saw more patriotism and law enforcement support in the country.

“A little over a month ago we were hanging out at this beach we always go to, and we were standing in the water talking about how every time we turn on the TV right now you just see police being bashed,” Winders said. “We felt like it was important to let our local law enforcement know we’re staying with them, and we’re behind them.”

After posting the Facebook event, hundreds of people responded saying they would attend.

“We really want to make this an annual event after seeing the support we had this year,” Winders said. “We would want to try and raise money for a good cause. We will start planning it earlier next year too, so we can be a little more organized for it as well.”

Winders said if they do it again next year they would also just go idle speed down the water for safety.

“We want the smaller boats and pontoons to be able to handle it next year and for the lake to not turn into an ocean with huge waves,” Winders said.

The event page encouraged boaters to have their American flags flying. The parade began at Southern Harbor and ended at Highland Marina.

“Everyone I’ve talked to since the parade said they couldn’t believe how patriotic they felt again,” Winders said. “It kind of gave me chills hearing that. Even though, we did have some negative comments, that is what makes this country great. Everyone is entitled to their own opinions and voices. We didn’t want it to be a political thing. It was just all about showing support for local law enforcement and have a little pride in our country.”