AGCAO gives away 800 backpacks ahead of back to school 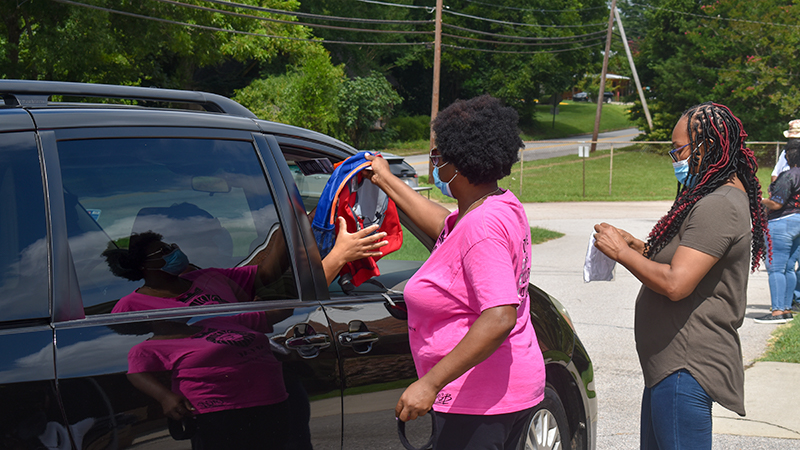 A volunteer hands a backpack filled with school supplies to a family in their car. Backpacks were purchased with locally donated funds and given away Saturday.

The Adaptive Growth and Cultural Advancement Organization held its fourth annual book bag giveaway on Saturday, distributing 800 bookbags to families in the LaGrange area, along with school supplies and face masks.

Leon Childs is the founder and director of AGCAO, an after-school mentoring and tutoring program. The event, which took place at HOPE Academy on Mooty Bridge Road, has been a labor of love, he said.

“What we did over a month ago, I put out a rallying cry, if you will, for the community,” Childs said.

Childs said the organization received about $4,000 in donations for the event, more than $3,500 of which was spent on the backpacks. Childs said the donations are from everyday people, along with local churches and the City of LaGrange.

This year, AGCAO is partnering with HOPE Academy, hosting after-school mentoring and tutoring classes for kids ages 5 to 16. In addition to events like the bag giveaway, donations fund payments for college students and teachers to work as tutors.

Mentoring and tutoring work together like “hand and glove,” Childs said, so that children can make good grades and have good behavior.

“That’s one good thing about this country that I do love — if you get your education, go to school, monitor your behavior, you can basically become anything that you want to be,” Childs said. “So, I use education as a tool in the community to empower the younger people.”

In previous years, AGCAO only distributed 100 to 200 bags, Childs said. Several Walmart trips, along with bulk orders from Amazon, meant Childs had all the supplies ready by Monday, July 27. Then, the organization spent all week preparing for the event, sorting and packing bags with supplies.

Volunteers also offered free masks to parents who were not wearing one, and asked if they were registered to vote

The voter registration aspect was organized by Diana Cofield, a volunteer, who was handing out registration forms and absentee ballot applications to those who needed them.

“So, while I was out here, I just decided to ask people if are they registered to vote … It’s your right, you have a right to vote,” Cofield said.

The event was scheduled from 10 a.m. to 2 p.m., but people started showing up at 8:30 in the morning. The 700 backpacks with school supplies eventually ran out, Childs said, but he was able to retrieve another 100 bags that didn’t contain school supplies, bringing the total to 800.

Numerous other organizations partnered with AGCAO, including Get Fed, $1 Thursday, Sharp Mentoring Group, HOPE Academy and the “Chatty Women of LaGrange” Facebook group.

Anthony Talley of Get Fed said he often partners with Childs. Get Fed has also done backpack giveaways, so they decided to partner with AGCAO this year. Quay Boddie, Talley’s partner in Get Fed, which provides food and fellowship to the LaGrange community, helped pass out bags.

Childs was happy to get rid of all the bags, and looks forward to the upcoming school year, despite the challenges presented by COVID-19.

“The youth, that’s our future,” Childs said. “If we empower the youth, and make them strong, this country, this city, this town, the whole universe will be a lot stronger.”

Hundreds of boaters fill West Point Lake for back…