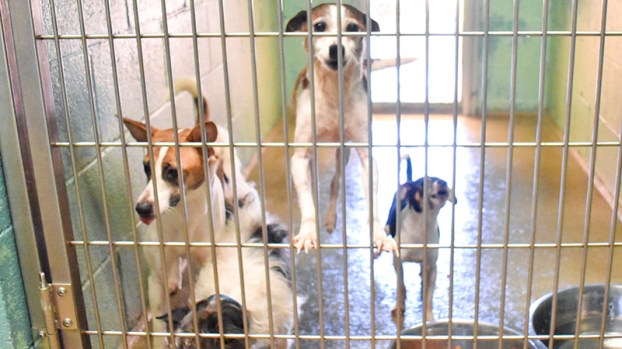 The City of LaGrange is participating in a nationwide, annual “Clear the Shelters” event to help find loving homes for animals in need. Adoptable dogs and cats will be half price during the month of August, according to a press release.

The initiative is a collaboration between hundreds of shelters across the country and NBC and Telemundo-owned TV stations, so adoptable dogs and cats from LaGrange will be featured in commercials on Atlanta NBC affiliate WXIA 11Alive and Telemundo Atlanta throughout the month.

In addition to the month of half-off fees, adoption fees will be completely waived on Saturday, Aug. 29. Animals are available for adoption at the animal shelter on Orchard Hill Road and at Petsense in LaGrange Plaza off Commerce Avenue. The shelter’s normal Saturday closing hour of 2 p.m. will be extended on Aug. 29 to 5 p.m. Petsense is open Saturdays from 9 a.m. to 8 p.m.

The mobile adoption unit is a camper-like air conditioned vehicle that can bring and display additional animals at the site.

The animal shelter partners with Petsense, which hosts and adopts out some of the shelters cats.

This is the first year the LaGrange shelter has participated in the campaign, Bussey said.  So far, 10 animals have been adopted in the month of August. The shelter currently has 14 dogs and close to 60 cats, he said.

“During the months of March … to August our numbers are usually higher than the rest of the year because of puppy and kitten season,” Bussey said.

Shelter operations have been affected by the COVID-19 pandemic, but so have adoptions.

“I think our adoptions are up because of quarantine,” Bussey said, believing that people are seeking companionship while spending so much time at home.

That would be in line with national trends. From March 15 to April 15, adoption inquiries on Petfinder.com increased by 122% from the previous four weeks, according to The New York Times.

Because of social distancing, however, the shelter can only allow one family at a time to enter the shelter and view animals. Bussey said appointments, available from 10 a.m. to 4:30 p.m., must be made to visit the shelter, with most appointments for a weekday booked up by afternoon the day before.

At half-price, adoption fees are as follows:

Bussey said most animals that are adopted have already been fixed, thanks to the shelter’s partnership with Auburn University.

For more information about the campaign, visit cleartheshelters.com.

AGCAO gives away 800 backpacks ahead of back to school