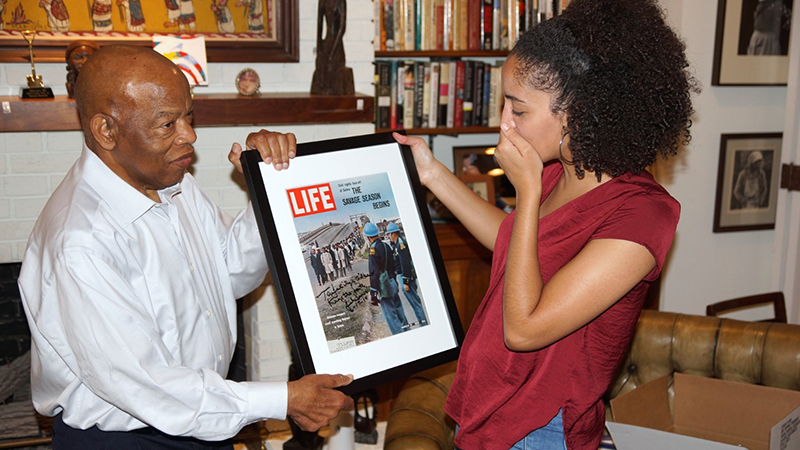 Over the last few weeks, the country has mourned the loss of congressman and civil rights leader John Lewis, who passed away at the age of 80.

But few got a chance to personally know Lewis the way Jocilyn Gilbert, a 27-year-old LaGrange native, has over the last four years.

Gilbert interned for Lewis’ Atlanta office starting in 2016 and was hired in 2018 as a constituent services representative. She still serves in that role for the fifth congressional district.

Gilbert, a 2011 Troup High graduate, said she was attending graduate school at Georgia State in 2016 when she got an email about internship opportunities. One of the items listed as an internship with Lewis’ office, and the interview was the next day.

“It was crazy that I happened to check my email,” she said.

In her time working for Lewis, she said many memories stand out. She remembers staff lunches where everyone would eat together like a family, and Lewis would talk about events going on in the country or other items on his mind.

“He just really loved the kids and the younger people in the office,” she said. “He was just so excited about the next generation. I remember when the Parkland [high school] shooting happened and all the high school students were speaking out, trying to get legislation for gun reform, to help stop gun violence, especially in the schools. He was so proud of them.”

Using that example, Gilbert said Lewis regularly had something motivational to say.

“He was telling us don’t take anything from people. Stand up for what’s right,” Gilbert said. “It’s kind of cliché, but he would actually talk to us like this. It was super motivational.”

Gilbert has a photo of Lewis handing her a signed copy of a Life Magazine from March 19, 1965.  The cover shows marchers walking over the Edmund Pettus Bridge in Selma, and Alabama state troopers watching as they get near.

Less than two weeks prior to that publication, on March 7, 1965, Lewis tried to lead a group of marchers over the Edmund Pettus Bridge and was beaten and bloodied by state troopers and other law enforcement. The day became known as “Bloody Sunday.”

On the front of the magazine, Lewis wrote “To Jocilyn Gilbert, keep the faith,” followed by his signature. Gilbert said Lewis gave a copy to the entire staff at last year’s retreat.

“He was really young [when that happened], and I think that’s why he was so drawn to us younger people,” Gilbert said. “He knew what all he was doing when he was young. And to see us doing these same things, he knows the things he impacted as a young person. He wanted us to know that we are young, but you can also change things around you. You don’t have to be older and have all these degrees. You can be doing that now.”

Lewis spoke at LaGrange College in February 2017. Gilbert didn’t get to go with him on his trip to her hometown, but she vividly remembers a conversation before his LaGrange trip where he was asking her about Troup County and discussing some of the amenities in the area.

“He was very intrigued that I was from LaGrange,” she said.

Gilbert said from time to time it would hit her that she was working not only for a congressman, but for someone as impactful as Lewis.

“It was such a treat being around him in intimate moments like us eating together or traveling together,” she said. “I got to know him backstage. It was very surreal. Sometimes I would be working in the office, and it would hit me that I was working for someone that most people on Earth will never get to see in real life. Some people say you don’t understand who you worked for, you don’t have a good understanding. I think I have a great understanding because I was a part of history. I got to see history.”

AGCAO gives away 800 backpacks ahead of back to…