Troup County native tells her story of 100 years in LaGrange 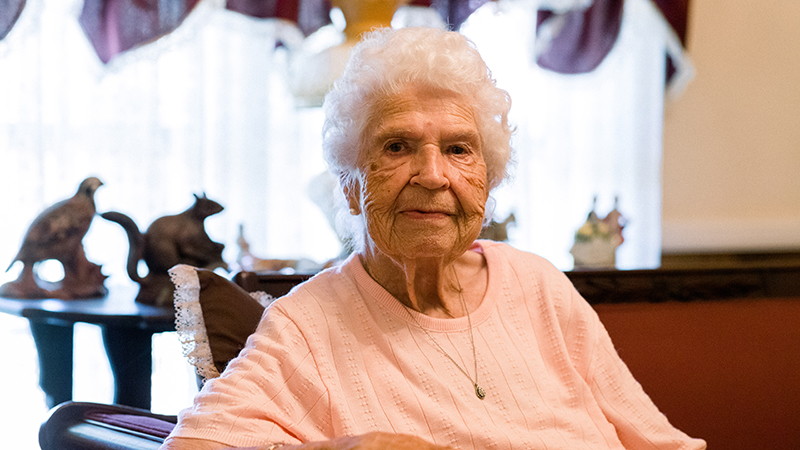 She’s seen it all.

Clyde (Allen) Moore is turning 100 years old this Sunday and has been part of the Troup County community almost all her life.

Moore’s lineage dates back to the beginning of Troup County when the Quattlebaum’s settled in the area.

After graduating from college at 18, Moore said she went to work at the Callaway Mills and moved her way up to be Fuller E. Callaway Jr.’s private secretary until the Callaways sold to Milliken.

“I worked for the mills for 36 years,” Moore said. “My desk was right beside Mr. Callaway’s. I kept all the books and trademarks. Mr. Callaway was one of the smartest, kindest and best man I have ever worked for.”

Moore said when anyone was ever sick in the Mill Village, Mr. Callaway would take care of their groceries and help them out any way he could.

Moore and her late husband ran a dairy farm up until he passed almost 20 years ago. Moore said her dairy farm also served the mills with milk.

To keep milk cold, her and her husband would tie up the milk onto a rope and let it sit in the well because they didn’t have a fridge or ice box to store it in.

“We were married for 65 glorious years,” Moore said. “I’ve been living on this property for 80 years now. Before we moved the house, we are in now, it was just a four-bedroom farmhouse that was already on the grounds. Before I married my husband, we had no running water, no electricity, no nothing.”

Although Moore may be reaching 100, she doesn’t let her age hold her back.

“I live by myself and love to garden,” Moore said. “I used to crochet a lot but my little dog will tug on the yarn and take off running. Although I may not be able to get out as much, and have had a hip replacement, I like to be doing something outside. My father was a carpenter, and I loved to always be with him and have always been a tomboy.”

Moore said she has a long line of family members that have made it to see 100.

“I also love to read and write poems,” Moore said. “Some of my poems have even been published in London. But my passion is flowers, especially azaleas. There are more than 60 azaleas on this property.”

Moore was born in the midst of the Great Depression, lived through World War II, the Korean War, Vietnam War and many more.

“We were almost better off way back in the day because we didn’t know really everything that was going on in the world,” Moore said. “People loved each other. No one really knew better because everyone was poor. We all took care of each other. Every war was the same because we were all already poor.”

Moore noted that her household was one of the few that had a radio in their homes and that is how they kept up with the world.

“Gabriel Heatter was the one that told us about the war,” Moore said. “We had several people in the community that were going to fight in World War II, and Gabriel was the one that kept us up to date. We couldn’t hardly wait to hear what he was saying.”

Thinking back to the Great Depression, Moore remembered how they sweetened their tea.

“Momma somehow came upon lemon drops and so we would ration those out, crush them up and sweeten our tea with them,” Moore said. “When we didn’t have that, we would put honey in there.”

During World War II, the Moore family would receive cow feed in anything but normal sacks.

“We started getting them in sacks made out of sheets and re-used cloths,” Moore said. “So, I saved them and made a nice set of designer sheets for my daughter.”

Moore has one daughter, Hertha Beedy, who is a retired school teacher from Troup High School.

Beedy said she wanted to throw a big party for her mom’s 100th birthday but due to COVID-19 she wouldn’t be able to.

“You know it’s just another birthday,” Moore said. “I have seen a lot of them, but I am proud. Everybody was put on the earth for a purpose and the Lord has done a lot for me.”