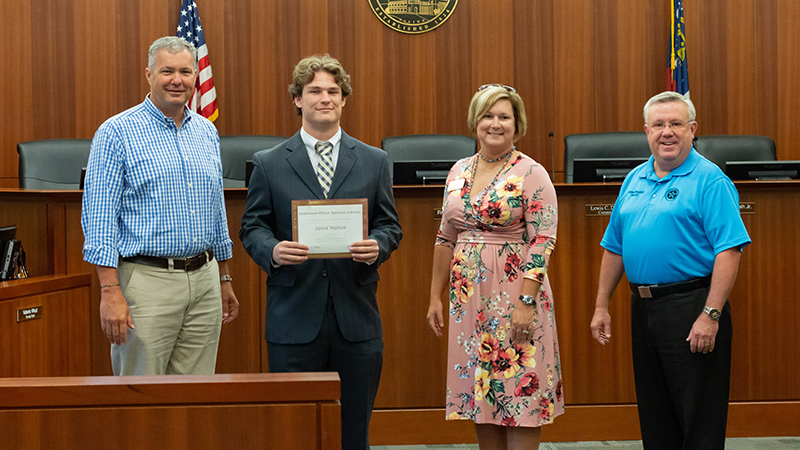 Callaway High School graduate Jared Nation is no stranger to adversity and hard work and now he’s off to college with multiple scholarships in hand.

On Thursday, Nation received his seventh scholarship from the Constitutional Officers Association of Georgia for $1,000 that he will be able to use toward books, room and board or anything else he may need as he heads to Georgia Tech on Saturday.

“This year we had a record number of applicants. We had over 50 applicants,” said Executive Director COAG Missy Tolbert. “Out of those 50, we only chose four.”

Nation said without the help of all seven of his scholarships he would not have been able to attend Georgia Tech.

“Nine years ago, I had three strokes,” said Michelle Nation, Jared’s mom. “We’ve had lots of bills and lost pay over the time. Two years ago, I had to quit work because of health issues and had to go back and forth to Mayo Clinic so money that we would have loved to have given for college is not there.”

Michelle said Nation has stepped up to drive her to appointments and errands after she wasn’t able to drive anymore.

“He has helped his grandparents once my dad died and has been there for my mom with health stuff,” Michelle said. “We’re very thankful that he was awarded the scholarship. He has earned it. He’s such a good kid.”

Applicants were required to choose a constitutional officer to interview and write an essay on. Nation chose Troup County Tax Commissioner Shane Frailey.

“I appreciate what you wrote in there because you really got my heart and showed what I do,” Frailey told Nation. “I really appreciate it.”

Tolbert said that was one of the major reasons that Nation’s essay was chosen.

“The four winners this year really got to the heart of those constitutional officers,” Tolbert said. “You didn’t just research what they did. You showed who they actually are as a person and who they are in the community and the reason why they get elected. You got to the heart of who Frailey was. You were unanimously the top choice among the whole committee.”

Frailey said that when the COAG committee reviews all applicants and essays they don’t know who the applicants are, their names or where they are from.

“Missy Tolbert is a champion for the constitutional officers,” said Sheriff James Woodruff. “She does a tremendous job representing us at the capitol and legislation pushed that helps us do our job here.”

Frailey commended Nation for always pushing himself during school.

“He’s a product of the local school system,” Frailey said.

“He’s been a product of that all his life. Now, he’s going to Georgia Tech to pursue a career at NASA and that speaks highly to our school system and Callaway High School.”