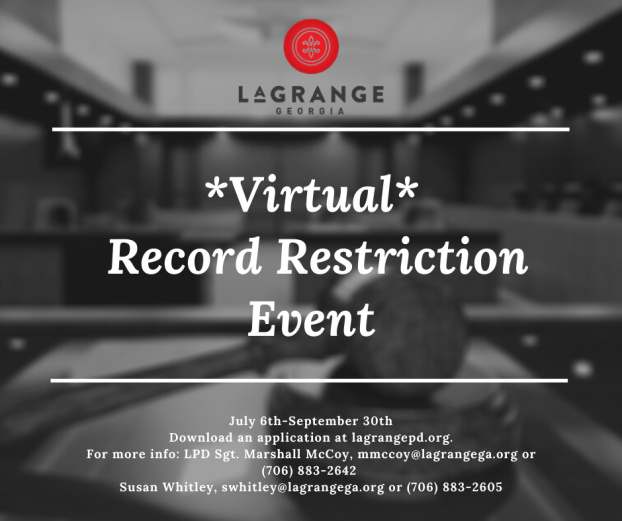 The LaGrange Police Department is hosting its free virtual record restriction event from July 6 until September 30, allowing people with past criminal violations to have their arrest records sealed.

Record restriction is intended to help people clean up their criminal history, which can have an adverse when seeking jobs and other opportunities. All records associated with a given arrest will be sealed, if the restriction is approved.

“People can’t coach their kid’s baseball teams because of something from 20 years ago,” said Susan Whitley, terminal agency coordinator, in an email announcement. “We just want to help them get their histories cleaned up as much as possible, so they can get on with their lives.”

Restriction, which is available year-round and typically costs $10 for retrieving the criminal history and $25 per restriction packet, is free during this period. In-person record restriction events have taken place in the past, but the pandemic forced this year’s event to take place virtually.

LPD Sgt. Marshall McCoy said the record restriction is aimed at placing people with a mild criminal background on equal footing when applying for jobs.

“Certainly, there’s some people out there who made some mistakes when they were younger,” McCoy said. “It does not restrict it from criminal justice, it only restricts it from employment purposes.”

McCoy explained that restriction is dependent on the nature of the crime — crimes against children, for instance, cannot be sealed, but old shoplifting charges can. Records for arrests in which charges were never brought, or the person was found not guilty, are also eligible for restriction.

“That [a not guilty verdict] could still cause a bias in a hiring decision, whether we like it or not,” McCoy said.

The decision to seal the records is ultimately decided by the prosecutor for the office that handled the case, Whitley said — state court, municipal court or the district attorney’s office.

Whitley said about 60 or so packets had been filled out so far by about 35 people, a figure she called “kind of low.” A record restriction event in 2019 led to more than 200 people being able to restrict their records. Whitley said the lower number this year may be attributable to the pandemic, as well as the fact that the Troup County Sheriff’s Office, a participant last year, is not involved this time around.

Those who wish to have a record restricted can download and fill out the paperwork online at http://lagrangepd.org/ or visit the lobby of the police department to complete it.

One restriction packet is required per arrest. For questions about record restriction, contact Whitley at SWhitley@lagrangega.org or (706) 883-2605.20

A long-time member of New Ventures, Inc. and Chairman of the Board, Wayne Bartley, passed away recently after a brief... read more