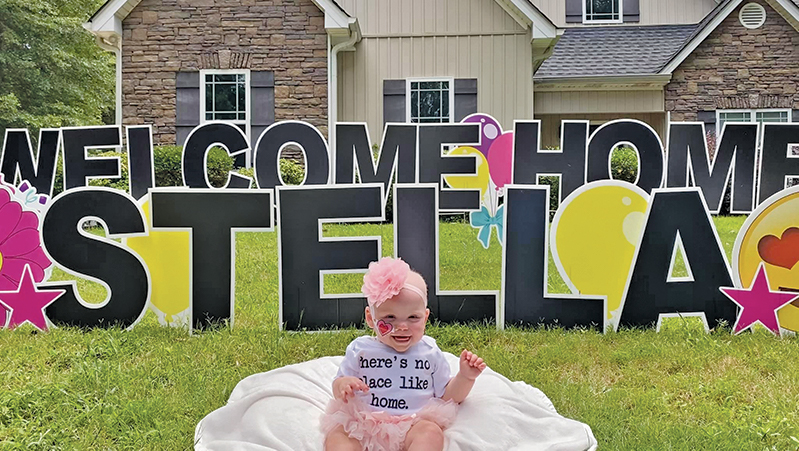 Stella Purcell in front of her home

She’s made it home.

Stella Purcell was born on Nov. 4, 2019, and 11 days later was diagnosed with SCID (Severe Combined Immunodeficiency), which essentially meant she didn’t have a functioning immune system.

The next nine months included her family having to live in and out of hospital rooms. Stella was under constant watch and needed a bone marrow transplant, but now she’s finally home.

“When she was born, you would have had no idea,” Purcell said. “Stella was a perfectly happy little baby. She was doing really well beginning day one and was eating and everything seemed perfect.”

Purcell said when they took Stella home everything was fine, but that changed when they went to Stella’s newborn appointment a few days later.

“Our doctor, Dr. Lisa Allardice, wanted us to go to Children’s Healthcare of Atlanta immediately to get the tests confirmed,” Purcell said. “We went to Children’s, and got more blood work done. At nine days old, it was confirmed by Children’s that she did indeed have SCID. We got the call on Nov. 13. I remember because that it is my son’s second birthday.”

The Purcell family immediately began social distancing and had to pull their two-year-old son from pre-school to keep Stella safe from any foreign germs or diseases.

“At that point, we had really never heard of SCID because it is such a rare thing,” Purcell said. “When we got to Children’s, we learned she would need a bone marrow transplant because basically SCID means she does not have a working immune system on her own.”

Both of Stella’s parents took the test to see if they could be a match for Stella but neither were.

“She matched with an anonymous donor from Be the Match registry, which was really cool,” Purcell said. “We know he is under 25, a male and from another country. This anonymous donor 100% saved Stella’s life.”

Before getting the bone marrow transplant, Stella had to be a little bit older to be able to handle the one week of chemo pre-transplant.

“We laugh because we started our social distancing and quarantine way before COVID-19 hit,” Purcell said. “We had to be very conscious about the germs we were bringing into the house because you know she wouldn’t be able to fight anything off. We were told that the strongest chance she has for the bone marrow transplant to be successful is if she is kept healthy and if she doesn’t get an infection in those months leading up to it.”

When Stella was born, Purcell said she was able to have that crucial skin-to-skin contact for a few days, but that had to change quickly.

“I was told I had to immediately stop nursing and switch to formula,” Purcell said. “Although it may seem counterintuitive because you always hear about the antibodies babies get from nursing, we needed to make sure she had completely sterile formula. This would ensure there would be nothing introduced into her system that could hurt her. It was absolutely heart breaking for me to have to do that.”

Purcell said Stella took the switch well. Unlike most newborns, Stella was not able to have any visitors.

Purcell and her husband were the only ones who could hold Stella. They even held her baptism at home. Stella received multiple daily medications and weekly infusions to keep her healthy, which is still continuing today.

“She was probably having to take five different medications a day,” Purcell said. “A nurse had to teach me how to administer IGG (intravenous immune globulin) called Hizentra. I had to learn how to put this little needle in that is attached to a pump that administers the medication. I was doing everything I could to keep her little body as healthy as possible.”

Purcell said although her son, Maddox, was only two, he could understand in broad terms what was going on. She added that he is very supportive and has loved her since day one.

On March 10, the family was admitted to the BMT wing of the Aflac Cancer and Blood Disorders Center at Children’s Healthcare of Atlanta at Egleston. Stella had a central line placed, received about a week of chemo and then the family celebrated her transplant day (T-Day) on March 18.

“That was pretty much right when COVID-19 hit, and I’m very thankful we were in the hospital receiving the best care that she possibly could be receiving and knowing that she was being kept safe,” Purcell said. “Day by day the rules would change. When we first got there, the rule was that she could have two caregivers with her at a time. Then they started to have to limit that to only one caregiver at a time.”

Purcell said she would stay there during the week and on the weekends her and her husband would trade. Both sets of grandparents stepped up to help with Maddox so Stella could stay at Children’s.

“Children’s was absolutely amazing,” Purcell said. “Nurses and staff were in and out constantly checking on her, checking her vitals and would always tell me what was going on.”

During treatment, Stella had to have a nasogastric tube inserted because the medications and chemo were causing sores in her throat and mouth and prevented eating.

“It was really hard to see what she was going through,” Purcell said. “Sometimes she would throw up blood. She is the happiest little baby and has had such a happy demeanor since day one so anytime you could see she was not feeling well it was really hard to watch. Her doctors and nurses did everything they could to make her as comfortable as possible through it.”

After six weeks, Stella was released from Children’s. Following the release, the Purcells moved into the Bullock Hope House in Powder Springs, which opens its doors to recovering, out-of-town medical patients.

“When we were first allowed to leave and it was going home day, we actually weren’t able to come home to LaGrange because we live too far from the hospital,” Purcell said. “They wanted us closer because she was still having two or three appointments a week and different visits to the Aflac Clinic. She started seeing a feeding specialists to work on trying to increase the bottle intake and other things.”

Stella had to have her labs and vitals checked regularly to make sure that the transplant was taking to her body.

“It was wonderful to stay so close because a couple of times she pulled her tube all the way out of her nose, and we’d have to rush her in,” Purcell said.

On July 1, the Purcells made their way home.

“We were here for about a week and a half, and then she spiked a really high temperature on a day that actually we were going for a clinic appointment anyways,” Purcell said. “We ended up being readmitted because she had high fever. She had a central line placed way back in March, to help with drawing blood, and it had become infected. She had to have surgery to have that removed and then we had to stay for a few more weeks.”

Fast forward to the end of July, and the Purcells were finally able to come home for good.

“She’s home and healthy,” Purcell said. “We go to Children’s about every two weeks and those appointments will start to decrease as she becomes more and more stable.”

Purcell said it has been an emotional roller-coaster and Stella never got to stay in her new crib or room, until now.

“When we came home, all the grandparents were just standing in the yard waving and so excited,” Purcell said. “We got a big “Welcome home Stella” put in the yard. It was so wonderful to have her come home finally. I know we’re not out of the woods yet. We’re looking forward to next March celebrating her second first birthday, her T-Day.”

If successful, the bone marrow transplant completely cures Stella of SCID. Come March 2021, Stella will be able to go to playgrounds, go out in public and even go on a Disney trip planned for the future.

“Coming home tells me we have hope and it is the step in the right direction,” Purcell said.