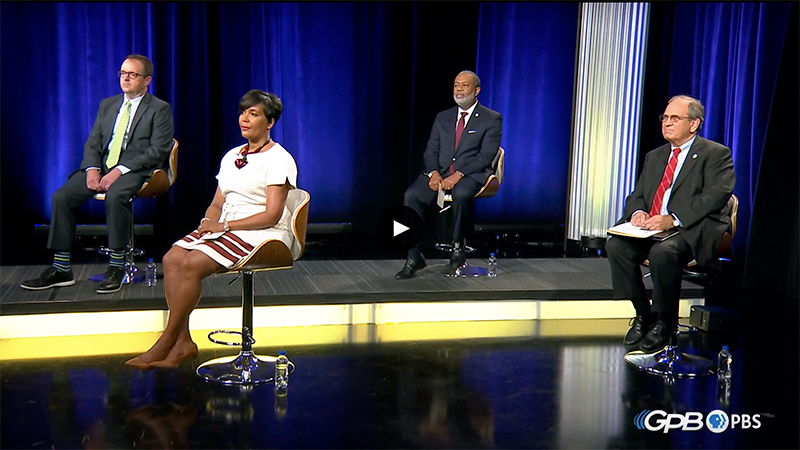 “Unfortunately, too often we focus just on symptoms, and we don’t get to the actual disease,” Thornton said in his opening statement. “We may tweak housing, or education, or law enforcement policies, but so often we don’t actually get to the core issue of racism and the division that it causes.”

One question from a local official asked at what phase of reconciliation government should engage community leaders, churches and other institutions. Thornton said that had to happen from the very beginning. He used the example of the Racial Trustbuilding Initiative, which brought together officials from Troup County’s three cities, faith leaders, public school educators and the business community, along with funding and faculty support from LaGrange College.

“In many ways, the business community is making more progress than sometimes the governments are in addressing these issues,” Thornton said, saying the chamber of commerce brings a different perspective to the table.

Black and Hispanic people have worse health outcomes than white people, and their mothers receive worse prenatal care. Perhaps the timeliest statistics showed that Black people are more likely to become infected, hospitalized and die from COVID-19 than white people.

Several statistics illustrated a lack of trust among Black people toward law enforcement, with nearly a majority seeing them as discriminatory. Black people are five times more likely than white people to say they have been stopped unfairly by police.

In light of this dynamic, Thornton said it is “absolutely critical” that law enforcement works to build trust with the Black community. Steps taken in LaGrange include law enforcement’s involvement with Racial Trustbuilding, the community relations task force, LPD’s work with homeless shelters and record restriction days, Thornton said.

Intended to provide guidance to other local officials around the state, the panel also served to set the stage for the work of GMA’s newly created equity and inclusion commission.

Thornton and Davis are co-chairs of the commission, which includes 24 other local officials from around the state.

“We’re asking all the commission members … to lead by example,” Thornton said.

Thornton said he was “honored” to be co-chairing the commission. The commission will meet virtually for the first time in about two weeks and then periodically for the rest of the year. It plans to present a report to the GMA board in January — a final report will be presented at the GMA convention next June.

“We’re not trying to script this conversation,” Thornton said of the commission. “We’ll bring the mayors together on a monthly basis for the rest of this year and just see where that conversation leads.”

When asked how local government can be more representative of the population it serves, Thornton mentioned the lack of involvement of young people, saying officials needed to work on bringing them into the discussion.

“Sometimes we’re just recycling the same people in some of these board and agency appointments,” Thornton said.

Among all the members of the LaGrange City Council, Troup County Board of Commissioners and Troup County School Board, Thornton said he was the youngest, at 47. Thornton said on some occasions, he’s reached out to young leaders in the community, and recommended other mayors and local officials do the same.

“Sometimes a word of encouragement from the mayor means a lot to somebody,” Thornton said.

Thornton also cited programs such as LaGrange 101 and Leadership Troup, as well as the LaGrange Youth Council, as channels through which Lagrange officials can connect with young people.

The panel was held in response to the nationwide protests following the killing of George Floyd by a police officer in Minneapolis. A peaceful protest took place in LaGrange, while larger demonstrations were held in bigger cities, such as Atlanta.

In his closing statement, Thornton said these types of conversations can be uncomfortable but are necessary to move forward as a community, and that he’s hopeful about the future. He also said he was glad the Georgia general assembly had passed a hate crimes law, saying it was long overdue.

“I’m hopeful, and I’m optimistic because we are even having the conversation,” Thornton said.