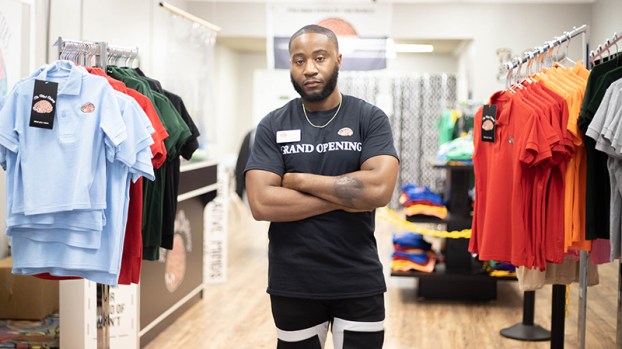 Brandon Todd, 27, has overcome it all. In LaGrange, Todd is known as a clothing designer and young entrepreneur, but those close to him know he’s much more than that.

“I’ve been displaying leadership since I was an adolescent but I truly became a leader during my college years,” Todd said. “Mentoring and leadership is just something that is in me. It is a part of me.”

Post grad, Todd began experiencing major loss in his life with the death of multiple family members he was close to.

“There were just a lot of complications going on,” Todd said. “It made me soak it all in and made me realize I only had one life to live. That I needed to put my all into this life.”

Adversity inspired him to create his brand, The Mind Clothing Company.

“I love fashion and I want others to feel inspired through passion,” Todd said. “When I started selling shirts, I wanted to showcase positive reinforcement in hope that others would reenact that.”

When it came to opening his clothing store, Todd always knew he wanted to plant the roots in LaGrange.

“I felt like why not start here when I was born and raised here,” Todd said. “I have family here. I have support here. I have people here who will listen to me and give me constructive criticism.”

Todd said it has been his positive mindset and creativity that have helped him overcome adversity in life, even when he lost his leg in a tragic accident in 2019.

“That really opened my eyes with a new perspective,” Todd said. “At that time, I was living in Atlanta and was leaving from downtown. I was leaving from getting food on my motorcycle when I noticed a guy on the side of the road that needed help.”

Todd said when he went to switch lanes, a car hit him, ran over him and then proceeded to drag him and his bike down the interstate.

“From that day forward, my outlook on life was just completely changed,” Todd said. “It didn’t break me, it really built me into a mental monster in the best way. I know they say you only live once, but in my head this is my second life.”

Alyese Cross has been playing the piano since she was three years old, so there’s little doubt why she’s chosen... read more