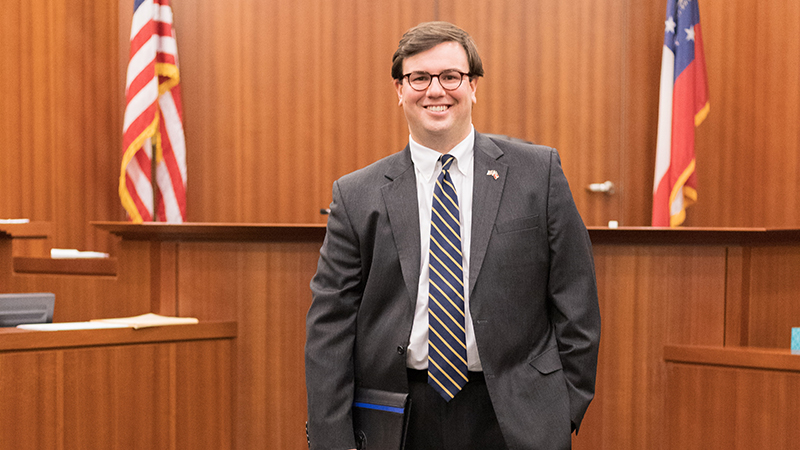 Assistant District Attorney Jack Winne often meets and works with people who are going through a difficult time in their life.

Winne, 29, specializes in gang prosecution as a member of the Coweta Judicial Circuit District Attorney’s Office, which oversees Troup County. He’s held that role since August 2016 and works for District Attorney Herb Cranford.

“Having always felt a calling to serve others, getting justice for victims of crime and doing my small part in making our community a safer place for all to live make prosecution particularly rewarding,” Winne said.

He serves as a Barrister in Bleckley Inn of Court, as a member of the Federalist Society of Law and Public Policy Studies, and as a member of the Georgia Gang Investigators Association. Over the last three years, he has presented or conducted trainings on gang prosecutions and investigations at conferences for the Prosecuting Attorneys’ Council of Georgia, GGIA, and the International Association of Chiefs of Police, among other organizations.

“One of the most compelling aspects of my time in LaGrange has been developing relationships with victims of violent crime and their families, especially murder victims,” Winne said.

“As prosecutors, we typically encounter folks during the most, or one of the most, traumatic times of their lives. I feel blessed to be able to earn the trust and confidence of victims during those times, and to be able to play a role in achieving a sense of justice, closure, and security. And often, those relationships continue beyond the conclusions of the cases.”

Winne said he hopes to continue serving the community as a prosecutor for the foreseeable future.

“Although the pay is not near that of many of my friends from law school, I prefer, and am fortunate, to have a vocation that is truly fulfilling,” he said.

When he is not working, Winne said he enjoys playing golf, tennis, and hunting, and he’s an avid Auburn football fan.