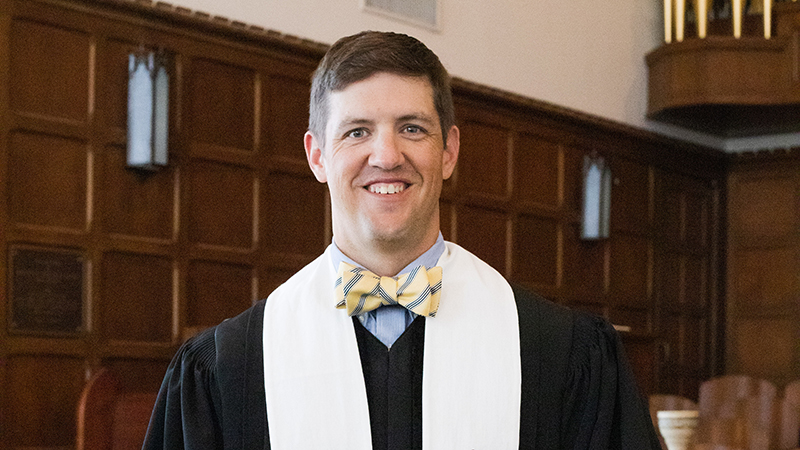 Like pastors everywhere, James Goodlet and the members of First Presbyterian Church in LaGrange have had to adjust how they handle services during COVID-19.

Goodlet, 39, moved to LaGrange in October 2018 and serves as the church’s lead pastor. He was born in Marietta and spent time as a campus minister at First Presbyterian Church in Tuscaloosa before moving to LaGrange.

“I know it’s cliché to say, but the people are my favorite thing,” Goodlet said. “These last few months have been hard without them around; there’s truly no substitute for worshiping alongside folks, shaking their hands, and seeing them face-to-face. To say I miss them is an understatement. I also love working for and serving a church that is open to creativity and innovation. The world is changing, and the church with it. So, we’re having to re-think what it means to be the church in the 21st century, and that’s a process I really love.”

In just a few years, Goodlet is already getting involved in LaGrange, and he plans to get more involved now that he and his wife of seven years, Margaret, are completely settled in Troup County. Earlier this year, he graduated as a member of the recent Leadership-Troup County class.

“Pastors are expected to be spiritual advisors, prophets, executive directors, writers, event planners, chaplains, public relations chiefs, administrators, professors, visionaries, and long-term/short-term coordinators, all the while leading personal lives with their own demands and expectations,” Goodlet said. “… At the end of the day, I’m an ordinary human being with my own faults and foibles, yet for whatever reason people welcome me into the most vulnerable, heartbreaking, wonderful parts of their lives … So if I were to name my career aspirations, it’s simultaneously simple and complicated: to serve the people here in all its simplicity and complexity so that all of God’s children know how deeply loved they are.”

Goodlet graduated from Furman University with a bachelor of arts in communication studies in 2003 and earned a master of divinity from Columbia Theological Seminary in 2007.  He and Margaret have two kids — Sam, 7 and Louise, 4. They also have two pets — Toonces the cat and Maddie the dog. Goodlet is a huge Georgia Tech fan, an avid fly fisherman, and he’s hoping to learn to play guitar.