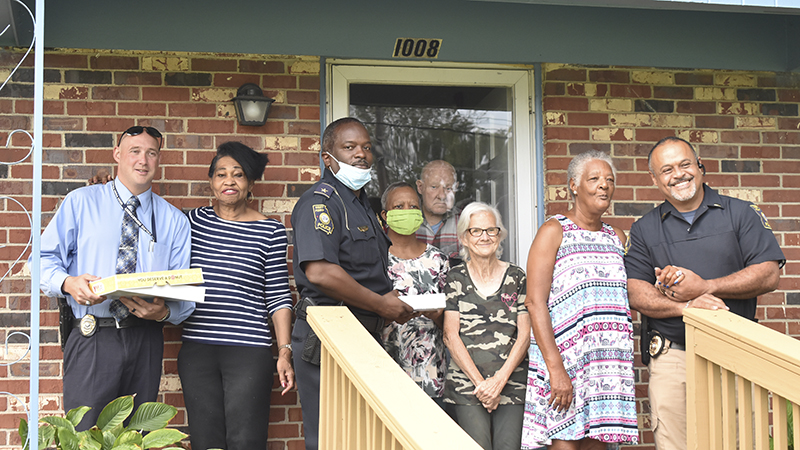 Officers from the West Point Police Department and members of the West Point Active Life Center visited a couple houses in West Point to deliver coffee and donuts to senior citizens on Tuesday. -- Cody Estremera

“With COVID, a lot of our senior citizens can’t get out,” Police Chief Donald Britt said. “We just wanted to get out and serve them and see them. Today, we’re going to about five houses. Hopefully, it’ll grow and we can do it at least once a month. Instead of ‘Coffee with a Cop,’ we had Coffee brought by a Cop.”

Since the Active Life Center has been closed since the middle of March due to COVID-19, Britt wanted to make sure his officers could still show support for the seniors of the community. He reached out to Zelma Brock, who is the site manager of the Active Life Center, to set up the visits.

“It’s great. We look forward to it,” Britt said. “We used to stop by the Active Life Center anyway, some of them because of COVID, but we’re going to keep this up periodically to keep visiting and taking care of the community.”

West Point Fire Chief Milton Smith has also helped out the Active Life Center, as the fire department has donated $400 to help supply some of the coffee.

The Active Life Center has been closed since the middle of March, which has made it tough on many of the seniors that frequently attend.

“They feel left out, and they want to go back to the center really bad,” Brock said.

Even though it has been closed for five months, the Active Life Center has been delivering meals and activity sheets weekly to seniors. Each week has five meals for the seniors, according to Brock.

“We hope it won’t be long before we open back up,” Brock said.

Brock said she is able to see most of the senior members as she tries to go every other Friday when the meals are delivered.