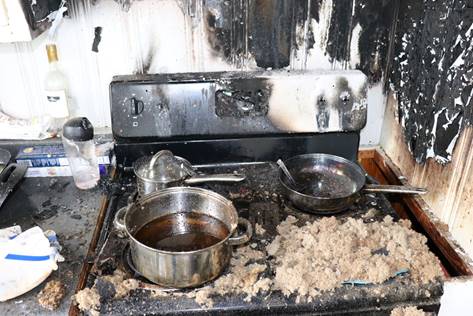 Damage from the house fire on Jefferson Street

None injured in fire on Jefferson Street in LaGrange

An estimated $6,000 worth of damage was done in a structure fire on Jefferson Street Monday, but nobody was injured, according to a press release from the LaGrange Fire Department.

Damage was contained to the kitchen, and the fire was caused by a pot being left on the stove, according to the release.

Firefighters were dispatched shortly after 1 p.m. on Aug. 17 to 506 Jefferson Street in the Hillside neighborhood. Upon arrival, firefighters saw light smoke coming from the residence.

“Command and accountability were established, Engine 5 arrived on the scene and advanced a 1 ¾ attack line through the front door and into the kitchen where they quickly extinguished the fire,” the release reads.

According to the release, nobody was inside the residence at the time of the fire.

Two men have been arrested for their alleged role in a robbery that took place on Aug. 9 at the... read more