Callaway Stadium to be limited to 30 percent seating capacity 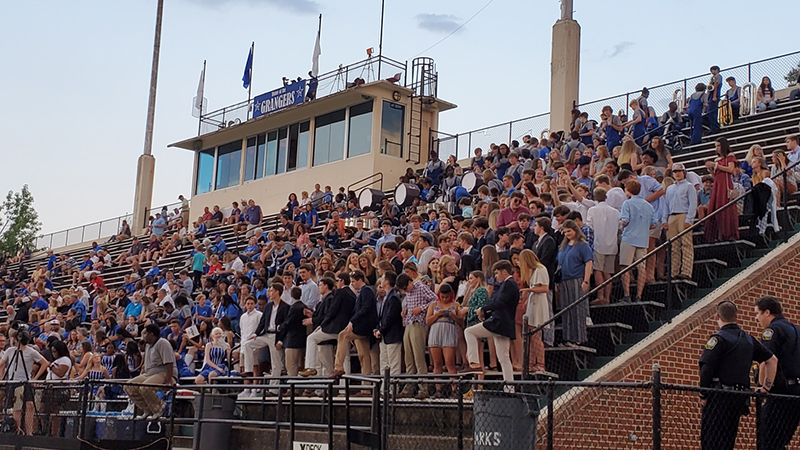 The Troup County School System has announced it is reducing capacity at Callaway Stadium to 30 percent of normal capacity this upcoming season.

Assistant Superintendent Chip Medders met with all three high school athletic directors Thursday to produce a set of guidelines for the stadium. During the school board’s work session Tuesday night, Medders had been asked about how the stadium would handle upcoming football games.

At that time, TCSS was still developing its plan, but was expecting to move forward with 60 percent capacity at the stadium. Superintendent Brian Shumate said Thursday that they rethought that after a lengthy discussion with the board on Tuesday night.

Fans will be required to wear a mask when entering the stadium and are asked to keep them on the entire time they are in the stadium. Temperature checks will be performed as people enter the stadium.

Medders said Tuesday the big concern is right off the bat on Sept. 11, when Callaway and Troup play in the second week of the season. That’ll be the first home game of the year at Callaway Stadium and is typically one of the largest crowds.  LaGrange High is also having an intrasquad scrimmage Friday.

“We are going to put out suggestions on what we’re trying to do and encouraging families to sit together,” Medders said Tuesday. “Once they get into the stadium at a football game, that’s going to be a challenge.”

During Tuesday’s work session, Board Chairman Kirk Hancock had spoken about how Troup County School System is one of few around the state to require masks, and he’s worried all the hard work in the classroom might go for naught at a football game.

“We can do all this hard work in our buildings and blow it on a weekend,” Hancock said.

He later said that he hopes funding isn’t the issue.

“We should find funds to fund education rather than have one extra person sitting in the stadium than we think is the best practice,” Hancock said. “I think we can dig deep and reimburse athletic programs. I get that [football] is the cash cow. We talked earlier, and we are doing so many things in the classroom that it concerns me greatly that in the height and excitement of a football game that suggestions are going to fall by the wayside.”

Following that discussion, Medders and the athletic directors met to complete a more concrete plan.

Medders said outside of the two intra-county games, he doesn’t anticipate the limited seating to be a big issue. He’s hoping things change considerably before LaGrange and Troup play on Nov. 13.

“Hopefully, things have changed dramatically by then,” he said. “I sure hope so.”

Here are some of the additional guidelines for the stadium:

□ Temperature screenings will be administered for all attendees before entering the stadium following DPH recommendations. Spectators with a temperature of 100.4 or higher will not be permitted entrance.

□ All spectators will be required to wear a face mask while entering the stadium and while making their way to their seat. However, it is highly recommended that masks are worn while seated.

□ Prior to boarding the team travel bus(es), van(s), any form of school transportation, each individual student-athlete and staff member should be verbally screened by a staff member (usually a coach) and temperature recorded with appropriate action taken, as necessary. Each temperature should be taken prior to departure.

□ If there is a potential or identified risk from screening, either based on symptoms or temperature level, the individual should wear a face covering and be sent immediately to a designated area for isolation and the school’s action plan implemented.

□ On competition day, opposing teams will be notified of any potential risk observed through screening to determine team competition status.

□ The TCSS COVID Decision Matrix will be used for athletics.

□ It is mandated that face mask/cloth coverings will be worn while on buses traveling to and from all athletic/extracurricular events.

□ It is mandated that face mask/cloth coverings will be worn properly (covering nose and mouth) when entering facilities, and on the field of play during any pre-warm up walkthrough which does not require increased demand on the student-athletes’ cardiorespiratory system (i.e. pre-game walking off the field in football).

□ It is highly recommended that face mask/cloth coverings should be worn by student-athletes while on the sidelines/benches and not actively engaged in competition “field of play.”

□ Masks should not be shared.

□ Cloth face coverings should never be placed on:

o Children under the age of 2; OR

o Anyone who has trouble breathing or is unconscious, incapacitated or otherwise unable to remove the face covering without assistance, OR

o Anyone who cannot tolerate a cloth face covering due to developmental, medical, or behavioral health needs

□ Teams should follow their hydration plan throughout the course of competition – each school is responsible for providing a plan for individualized hydration supplies for their student athletes on competition days.

□ Bench water should be provided by host school, but the traveling team should supply its own coolers unless agreed upon by the host school.

□ All benches should be wiped down using proper CDC-approved cleaning agents before and after competition.

Wipe down bench spaces as frequently as possible throughout competition.

□ Towels will not be provided by the host site. If student-athletes prefer the utilization of a towel during competition, they should provide their own towel and should not share their towel with other members of their team.

□ Sideline personnel should be limited to participating athletes, coaches, medical staff and game day staff; anyone on the sidelines or involved with the contest should adhere to these guidelines.

□ When possible, benches and sidelines should provide adequate seating to allot for individualized seating for all student-athletes and members of the coaching staff for each team to allow for appropriate physical distancing when not on the field.

□ Spectators will be restricted from direct competition areas and from visiting with student athletes and personnel before, during and after events.

□ Mask wearing will be highly encouraged for all while attending events.

□ Seating throughout the stadium will be marked in order to identify social distancing recommendations as provided by DPH.

□ Tailgating prior to the game is highly discouraged