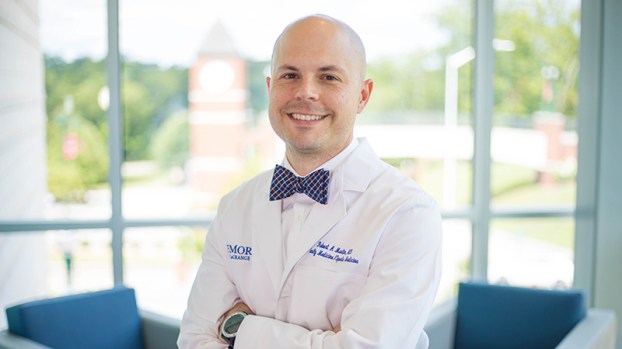 For Dr. Robert Martin, being a member of the medical profession isn’t just a way to make a living — it’s a calling, a way to make a difference, to be a shining light in the lives of those who are struggling.

“A lot of times you see people at their most vulnerable, or low point, and they’re sick, or there has been a huge life event that’s happened, and you’re allowed that opportunity to be able to be a light, and help in those situations,” said Martin, a doctor at Emory Clark Holder Clinic with a specialty in family medicine and sports medicine.

Martin, who grew up in Dothan, Alabama, was going to follow in the footsteps of his father and become a veterinarian, and that’s the path he was headed toward during his first few years as an undergraduate student at Auburn University. During that time, Martin participated in a mission trip to Honduras through his home church, and his path changed when he saw how physicians were able to help those in need, and in some cases provide life-saving services. Martin remembers one child in particular who was malnourished and in a desperate situation when she was aided by the doctors.

“That made a big impact on me, the way they cared for the child, and made a difference in the child’s life, and then also, the whole purpose of my life has been to bring glory to God, bring glory to Jesus Christ, who is my savior,” Martin said. “I was like, why don’t I try out people medicine? Probably halfway through undergraduate I made the change.”

After receiving his undergraduate degree, Martin attended medical school at the University of Alabama at Birmingham, and he served his residency at Self Regional Healthcare in Greenwood, South Carolina.

After his residency was completed, Martin and his wife, Casey, moved to LaGrange as he took on a position at the Emory Clark-Holder Clinic. The couple has four children, including one who was born earlier this year. Sadly, the family suffered a tragic loss in February when Jane Frances Martin, the Martins’ 2-year-old daughter, died. Martin said he leaned on his faith and his trust in Jesus to see his way through the tragedy.

“You can either be really mad, and start asking lots of questions of why this, or you can have that true faith and know that he is God, he is the creator of heaven and earth, he is what the Bible tells me about who he is,” Martin said. “He’s a good God, a merciful God, a gracious God. That trust has not gotten weaker, it has gotten stronger.”