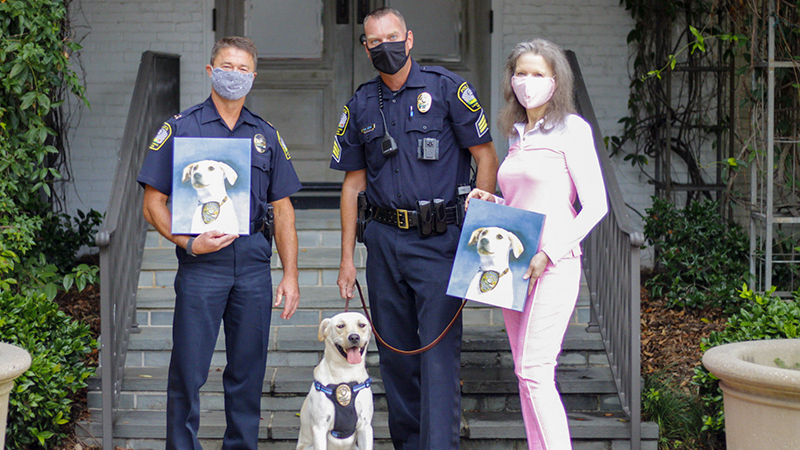 Gadrix said she was inspired to paint Donut after seeing a photo of him on the LPD Facebook page when Donut was only a few weeks old.

“I love painting dogs and I was actually working on a painting when someone showed me the photo from Facebook that you (LPD Sgt. Marshall McCoy) took up the dog on the car,” Gadrix said.

“If a photograph is great I get inspired. I was just really inspired by the photograph.”

Gadrix said she typically paints German Shorthaired Pointers and other sporting dogs but has never painted a lab before.

Donut is brought on staff at LPD to be used in schools or senior care programs as a part of their outreach program.

Donut also assists the LPD with the mental health court, which is one of the many alternative court systems.

His tail can also be found wagging amongst children in waiting rooms at the juvenile courtroom.

While a child waits, he or she can play with the dog to relieve nerves, but it also gives the administrators a chance to see how that child interacts with the dog.

“This dog has really just been so inspiring,” Gadrix said. “I just thought after I did the painting, if you paint someone’s dog you want them to have the painting. So I had two giclee prints made so they could have one in the department and so that Sgt. McCoy, his handler, could have one.”

Gadrix said she had never actually met Donut in person until Friday.

Gadrive who is an artist Visual Artists Alliance of LaGrange (VAAL) will have the original oil painting of Donut on display in an upcoming exhibition at the LaGrange Art Museum starting Aug. 28.

Gadrix also included with the prints a letter to Chief Lou Dekmar that said, “please consider this gift as a symbol of appreciating the work of the LPD in keeping our community safe.”

McCoy said he loved the painting of Donut and couldn’t wait to hang the print up.

“It’s just nice to know a lot of people see him,” McCoy said. “We know that he is getting out there and that social media works. He is able to have an influence which is cool to see. Maybe this will inspire others and even children to do some drawings of things.”