Troup could lose federal funding from lack of Census response 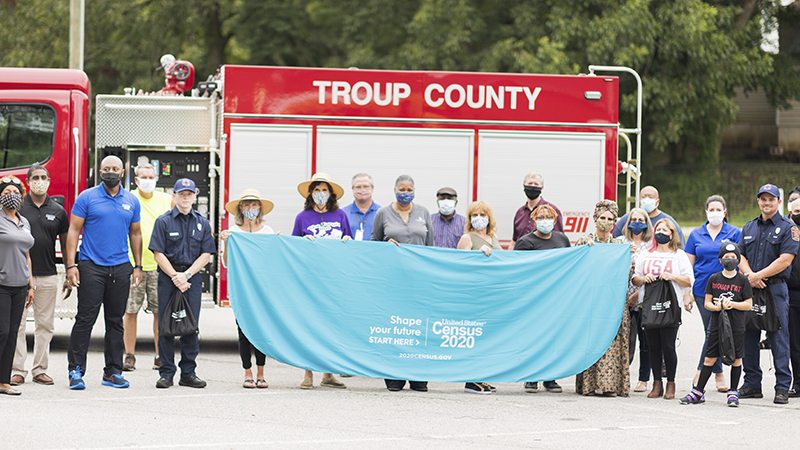 The US Census Atlanta Regional Office is expecting Georgia and Troup County to miss out on thousands of dollars from federal funding if more people don’t take the Census.

Ty Harps, Census Lead Partnership Specialist, said that LaGrange and Troup County is having a repeat from 2010 and is seeing a low response rate to the Census within the area. As of Wednesday, 55.9 percent of LaGrange residents had responded to the Census.

“In 2010, LaGrange had a somewhere between 50 to 60 percent of a response rate and because of that, the community did not see a whole lot of funds come through over the past 10 years,” Harps said. “Approximately 40 to 50 percent of Troup County did not participate in the 2010 Census, so we’re trying to get the rate up as high as we can.”

On Wednesday, members of the Census Bureau, local churches and other local non-profits lined the area of Calumet Park and paraded through town encouraging the community to take the Census.

“We drove through this LRS (low response score) area, and this was the same LRS Area in 2010,” Harps said. “We went through the neighborhoods, honking our horns and just blitzing them with Census information, giving out information and trying to get the word out. The rest is up to LaGrange to encourage the community to participate in the Census. We have just a fair amount of time to make sure all of LaGrange and Troup County gets counted.”

Harps said that he saw a lot of the members of the Calumet area say they were scared to take the Census.

“They said they were scared of the government,” Harps said.

“They were nervous about taxes and tax refunds and running into problems with the government. It was just a miseducation. They haven’t been educated. They have no idea what it brings back to their community.”

Harps said him and his team worked tediously throughout the parade to try and trump any misconceptions about the Census.

“If people don’t take the Census now, they won’t get that possible funding and have another chance to take it again until 2030,” Harps said. “When we know better, we do better. We explained to them that we don’t share with any other governmental agencies other than numbers. We do not give out any personal identification information. The only thing we share is numbers.”

Harps said the Census Bureau has attempted to do everything it can to get the community to take it and now it is up to local leaders, organizations and churches to continue the efforts.

The last day to take the Census is Sept. 30 and includes less than 15 questions.

“It seriously only takes about less than 10 minutes to take it,” Harps said. “We are running out of time, but there is still a chance to get the numbers up.”