Hogansville church may be satellite voting precinct, but questions remain 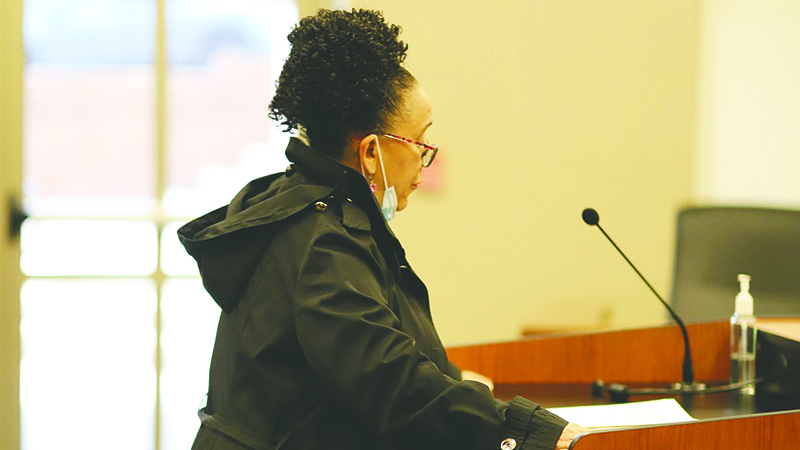 Frances Hunter of St. Paul A.M.E. Church in Hogansville speaks at Wednesday’s board of elections meeting.

On Wednesday, the Troup County Board of Elections decided to move forward with St. Paul A.M.E. Church in Hogansville as a satellite precinct and directed Elections Supervisor Andrew Harper to research what it would entail to make that a reality.

At the Troup County Board of Commissioners meeting on Thursday morning, Harper explained to commissioners that he did not know enough about satellite precincts, nor did the Board of Elections know how much funding they’d need to operate it.

Board of Commissioners Chairman Patrick Crews said due to the uncertainty, the commission could not approve any funding yet. Crews said Harper and the board of elections will need to conduct further research and come up with a more formal request for funding before commissioners approve any allocation.

At last month’s board of elections meeting, Harper was tasked with developing a timeline showing the steps it would take to establish St. Paul A.M.E. Church as a voting precinct in time for the Nov. 3, 2020 election.

Harper did develop a timeline and presented it to the elections board on Wednesday, but he also said that he didn’t believe the precinct could be established in time for the Nov. 3 election.

Harper noted five required steps, which included placing an ad in the legal organ that has to run 30 days before the board could take action.

He said that meant that the board couldn’t take any action until late September, after ballots must be built, proofed and printed, which makes the timeline impossible.

Following that discussion, Hunter made the suggestion of turning the church into a satellite precinct.

She presented 19 petitions seeking the creation of a second, satellite polling location within the Hogansville Precinct at the St. Paul A.M.E. Church.

“A petition under O.C.G.A. Section 21-2-265(a) does not require the board of elections nor the supervisor of elections to agree to adopt this change and there is no enforcement mechanism under the code that would require them to implement the change,” Hunter said.

Harper said Wednesday he would have to do further investigation into what a satellite polling location would entail for the voting machines and to make sure no one would be able to vote twice in the precinct.

“If half as much effort had been expended toward establishing St. Paul AME Church as a new voting precinct as has been utilized to prevent it from happening, we would not be here having this conversation today,” said Elections Board Member Al Prado. “Where there is a will, there is a way. And in this case, there just does not seem to be the will to do the right thing for the citizens of Hogansville.”

Retired educator returns to hometown of LaGrange after 30…