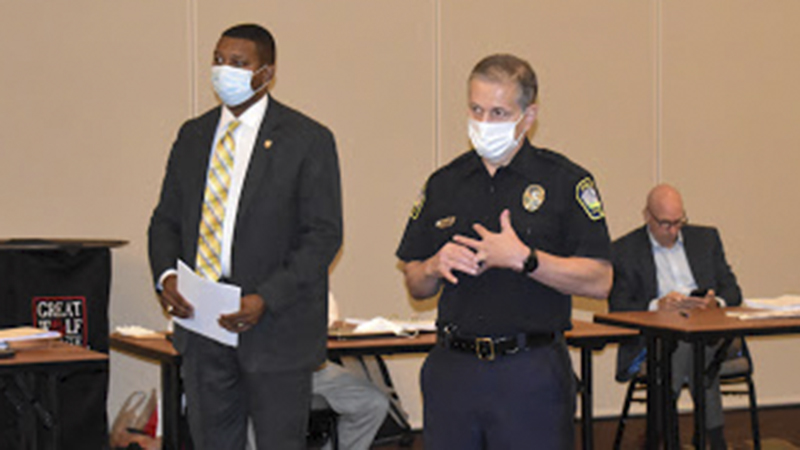 The LaGrange City Council and LaGrange Police Department Chief Lou Dekmar discussed investing in dozens of new police cameras around town at the mayor and council retreat on Tuesday.

The idea for the presentation, which Mayor Jim Thornton asked Dekmar to prepare, was for the LPD to create a plan for comprehensive camera coverage across the city, presenting what the department would do if money were no object.

“I personally think we need to cover the whole city with cameras, and I appreciate the comprehensive approach you’ve taken here,” Thornton told Dekmar.

Moving forward, LPD will work with City Manager Meg Kelsey to determine how many cameras would actually be bought and how the project would be financed. A more concrete proposal would be submitted to the council for approval at a later date.

Dekmar attested to their usefulness, referencing a gang-related homicide where the suspects had come from Mississippi. The only lead was a partial description of the car, which police then used to track the car as it left town and made its way back to Mississippi.

“Frequently, cameras are the sole lead that we have after a witness tells us ‘Well, I saw a gray car,’ or ‘I have a partial photograph,’ because then we can start going through the video that’s located throughout the city,” Dekmar told council members.

Dekmar identified 24 sites to place new cameras, most of them intersections. Police would like to have a camera at every place someone can exit the city, from major thoroughfares to back roads. Other sites were chosen based on requests from neighborhoods, service call data, as well as crime trends and history.

Two camera system options were presented — PlateSmart and Flock. Both systems are license plate recognition (LPR). The cameras record pictures of cars and their plates but do not photograph pedestrians. LPD already has LPR cameras at 12 intersections in the city.

Platesmart notifies police almost instantly when a wanted vehicle is spotted, Dekmar said, while Flock is not as immediate.

Going with Flock, on the other hand, would involve leasing up to 65 cameras for a cost of about $162,000 per year for the new cameras. The city would not have to replace or maintain the cameras.

“There is funding available for this, if this was something the council felt strongly about,” Thornton said.

Council Member Nathan Gaskin asked if Hogansville and West Point could coordinate with LPD to buy their own cameras in a bulk order that may reduce the cost per camera.

Dekmar said he would speak with other police departments in the area to see if they are interested in collaborating.

Troup could lose federal funding from lack of Census…