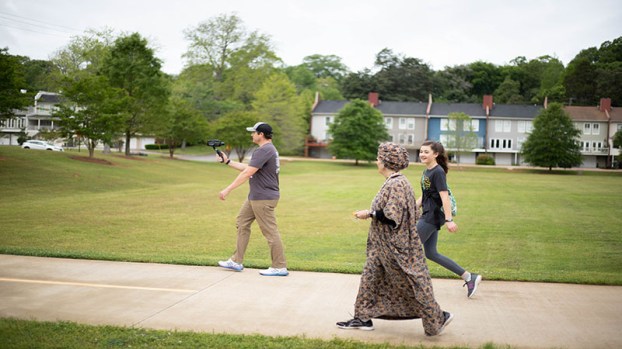 Natalie Hale, executive director of Friends of The Thread, updated the LaGrange City Council on the state of the project, which eventually is planned to span 29 miles of paved trails.

Four segments — Granger Park, Eastside Park, LaGrange College and Country Club — have been completed since the project’s inception in 2016.

Still to come is the Panther Park Trail segment, which will run from the LaGrange College baseball field down to the Callaway Foundation building. The Thread is waiting on a $200,000 Recreational Trails Program grant approval for that to be built, but the design is complete. RTP is part of the Georgia Department of Natural Resources. Construction on this segment should begin early spring 2021.

For Hale, the “most exciting” segment in the works is the seventh segment that will run from Cherry Street down past Mulberry Street Cemetery, then hug the rail line and go down Dunson Street to Callaway Memorial Tower. It will continue South to Hunnicutt Street. The segment will cost $120,000 and be paid for by Friends of The Thread.

The design for this segment is 90 percent complete, though easements are required from CSX Transportation, Dixie Mill Enterprises, Callaway Foundation, City Light Church and Jackson Beverage. The CSX permitting process is currently holding up this segment, Hale said.

“Turns out half of Dunson Street itself is in the CSX right of way,” Hale said. “We had no idea until we got it surveyed.”

The fifth, partially completed segment of The Thread, runs from Twin Cedars Youth and Family Services to Calumet Park, where it ends. Eventually, this segment is supposed to continue west through the Calumet Park neighborhood, cross East Depot Street and the train tracks and link up with another segment near Southbend Park. It is currently being held up by New Macedonia Missionary Baptist Church not granting The Thread an easement, Hale said.

“Their congregants do not live in the area,” Hale said. “So, the people that live on the street in that area, they are really pro-Thread and really upset with Macedonia.”

Council Members Nathan Gaskin and Willie Edmondson said they would speak with the church’s leadership to see if they could help resolve the problem.

The sixth segment runs from downtown down to Pierce Street and Cherry Street. Segment 6B runs from West Haralson up to Sweetland, which is mostly finished, except for the signage, which will be done in two to three weeks. Friends of the Thread paid for that segment, which costs about $400,000.

Hale also spoke about completed segments and the traffic they receive.

The first phase, the 1.2-mile Granger Park segment, averages 300 people per day and is the post popular portion of the trail. The second phase, the 2.1-mile segment that runs from George Harris Baseball Complex to Twin Cedars Youth and Family Services, is less used at about 60 people per day, but has tripled in traffic over the past year.

The third segment, from Granger Park to LaGrange Park, sees about 50 people per day, and should have increased traffic with the return of classes at the college, Hale said. Phase four is a popular segment from the college out Country Club Road toward Hollis Hand Elementary, and sees about 180 people per day.

Other updates provided by Hale were:

Hogansville church may be satellite voting precinct, but questions remain

On Wednesday, the Troup County Board of Elections decided to move forward with St. Paul A.M.E. Church in Hogansville as... read more