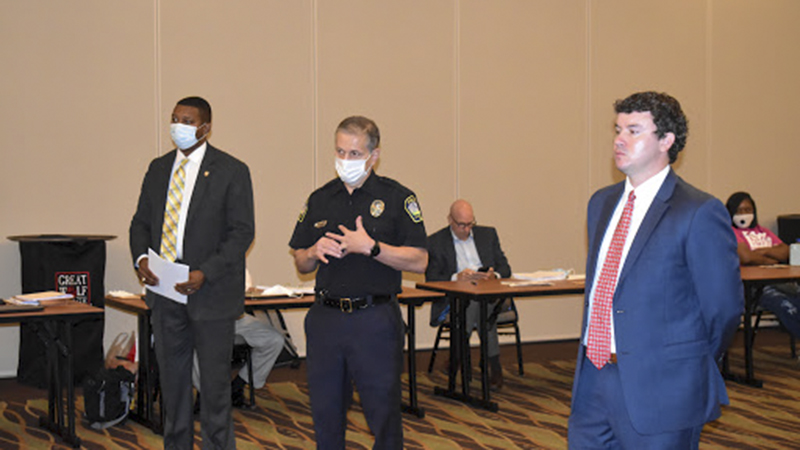 LaGrange residents have contacted council members and spoken at meetings in recent months, with some saying the police and district attorney’s office are being overzealous in prosecuting gang charges against young black men.

Following the complaints, Council Member Willie Edmondson asked for gangs to be a topic at the retreat.

In response, Dekmar gave a presentation outlining the history of LPD’s gang squad and vouching for its effectiveness in reducing crime. Dekmar was asked to present on gangs at the request of council members.

The impetus for ramping up the city’s anti-gang efforts was the June 2013 shooting at Calumet Park on Union Street. Seven people were shot during a large gathering. According to Dekmar, the incident was caused by a dispute between local sets of the Crips and Bloods. The LPD gang squad was formed that month “to eradicate violent crime and gang crimes,” Dekmar said.

In response to complaints of non-members being lumped in with gangs, Dekmar emphasized LPD’s vetting process. To classify someone as a gang member, LPD must gather evidence through multiple sources that someone is associated with a gang. Each case requires an independent evaluation of evidence, and no charge is made without the review of the investigator, supervisor, district attorney and police chief.

According to Dekmar, there are 144 self-identified gang members living in LaGrange. These are probationers and parolees that have admitted gang membership to police in the past, he said.

LPD also lists 26 gangs made up of about 400 members in LaGrange. According to Dekmar, the gangs fall under the Crips, Bloods, Gangster Disciples, Ghost Face Gangsters or neighborhood-based gangs such as Whitesville Road, Ova the Top, West Side and Purp Boys.

The 400 figure would mean that 1 in 100 LaGrange residents is a gang member. Council Member Nathan Gaskin, who said he had been “bombarded” with complaints about gang charges, wondered if that number was accurate, before questioning the constitutionality of the list.

“Does he know that he’s a gang member?” Gaskin asked. “We’re identifying people and putting people on a list.”

The main reason LPD shouldn’t change course, Dekmar said, was that measurable progress had been made in reducing violence. From 2016 to 2019, gang cases declined from 92 to 45. In the period since the gang squad was formed, gang shootings peaked in 2015 at 20 before declining to four in 2019. The year 2014 saw 37 gang violent crime incidents, compared to six in 2019.

“I want to increase what we’re doing,” he said. “I’m not going to pull back any of what we’re doing while I’m mayor. I would only increase it because the proof is in the pudding. And the results are being shown. Violent crime is going down, and therefore, lives are being saved.”

LPD also investigates cases outside of LaGrange. This is due to rivalries between local and outside gangs, Dekmar said. He mentioned a murder committed by a Mississippi-based gang in the city, as well as a murder committed by gang members from Atlanta. Another incident, a 2016 drive-by shooting at Granger Park where a person was killed, resulted from a dispute between two gangs based in LaGrange and West Point.

Dekmar cited several programs LPD participates in that are related to diversion. These include working with staffing agencies to find employment for offenders, the Easy to Learn Program at New Ventures, Teen Fusion through the Boys and Girls Club, gang squad officers volunteering as community coaches in local schools, the FBI’s Safe Streets Task Force, presentations to churches, civic groups, schools and businesses, the Teen Maze program, the Firm Foundation Alliance and the youth citizen police academy.

Some people have also taken issue with the city helping fund the DA’s office. For the past two years, LaGrange has given the DA’s office $75,000, and $65,000 the two years prior to that. Thornton, however, noted that the cities of Newnan and Carrolton both give more funding to the office.

District Attorney Cranford spoke to defend the work of his office.

At one point, Cranford pointed out a citizen who had attended the retreat to listen and who was wearing a Black Lives Matter T-shirt.

In criminal gang trials, Cranford said, his prosecutors have to prove someone is a member of a gang of three or more people, and that the crime in question was committed in furtherance of the gang’s activities.

Both Cranford and Dekmar said other communities with less gang investigations have problems with witness intimidation. Taking the foot off the gas, they said, would empower gangs to do similar things in LaGrange. A Georgia Bureau of Investigation Agent, Eugene Howard, also spoke to the council to attest to that.

Gaskin said LPD’s investigation techniques may be perpetuating the violence, and that the way officers have dealt with citizens to collect evidence has strained LPD’s relationship with the Black community and is “leaving a bad taste” in people’s mouths.

Gaskin also spoke about young black men being “ostracized by the board of education” and other institutions, dealing with problems at home and feeling a need for protection. Dekmar and Cranford responded by saying the failures of society could not be fixed by their departments.

“By the time we get involved, we’re dealing with folks that are involved in criminal behavior and victimizing others,” Dekmar said. “Our opportunity for intervention is much narrower than those other social institutions.”

Thornton steered the conversation away from a brewing argument between Gaskin and Dekmar, asking them to work together to improve LPD’s relationship with the Black community.

“I’d like to see the leaders of the African American community partnering with the LaGrange police department and the district attorney’s office and saying that we 110% support our police department because they are keeping us safe,” Thornton said.