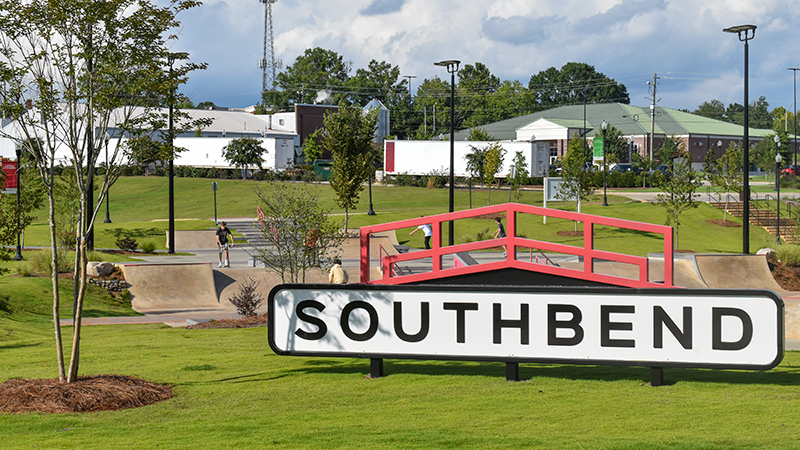 Above, people use skateboards and scooters at Southbend park on Aug. 31.

The LaGrange City Council was given a presentation at its retreat on Aug. 25 on a 10-year master park plan for the city.

The plan was created by Barge Design Solutions, a Columbus-based firm, which also collaborated with Indianapolis-based PROS Consulting.

“The plan is supposed to be a guide — it is not set in stone, it is meant to be modified, implemented, it should be a document that’s got sticky notes all over,” said Dave Bishop, a project manager for Barge.

“It’s easy to consider parks to be something superficial, just something where kids go and play, but it truly is a critical piece of the quality of life in a town and an economic engine, an economic development engine,” said Steve Provost, a landscape architect for Barge, adding that parks have impacts on property values and attracting new businesses.

Concept plans for two new parks were also presented. A “McGregor Park” would be located on city-owned property off Hamilton Road, bordered by Brown Street, Colquitt Street and McGregor Street. Under the plan, it would have an open lawn in the center. The lawn would be surrounded by several pavilions of different sizes and a path around the lawn.  A playground would be located east of the lawn, and a parking lot would be adjacent to the park.

Three concept drafts for a new “Benjamin Hill” park along Whitesville Road at the corner of Handley Street were presented. The purpose of this park is to help beautify the Whitesville Road corridor, one of the main thoroughfares into LaGrange, and to connect Whitesville Road with a proposed LaGrange housing authority development.

All three designs feature a combination of sidewalks and lawns with flowers, trees and shrubs to accent the edges, as well as small seating areas along pathways.

Under Barge’s implementation action plan, if the city implemented all recommendations from the master plan, it would spend an estimated $38.676 million over the next decade, about $3-4.5 million per year. LaGrange Mayor Jim Thornton said funds would come from a variety of sources. Some improvements could be funded out of the city’s general fund, and some improvements may be funded by a new SPLOST. The McGregor and Ben Hill parks would be funded by SPLOST 2017 dollars.

The impetus to develop the master plan was to bring all of the city’s parks up to the same level of service.

“Our level of service recommendation isn’t focused on getting more acreage of park,” Provost said. “It’s focused on doing the most you can with the acreage that you already have.”

After conducting research and analysis, Barge engaged in community outreach, including several public meetings and a survey that 413 people responded to. Using that information, they created a development plan, recommendations and an implementation plan.

In the survey, 67% of people said parks were as important as other priorities such as schools, infrastructure and public safety. Thornton said that at in-person town halls he’s conducted over the years, park improvements were one consistent thing that residents of all demographics and neighborhoods requested.

“What we learned from this is people want the park system to function as a community park system. We did not hear a lot of requests for athletic facilities for facilities similar to the ones that are in some of the county parks,” Provost said.

In terms of funding, 64% of survey respondents preferred parks to be funded by SPLOST money. About 83% of people supported using SPLOST dollars, increase in millage rate or some combination to fund new projects and maintenance on The Thread, while about 17% did not support funding for The Thread.

Disparities between parks and the lack of a unified brand were identified as issues by city staff.

“All of our parks need to have that same cohesive look and feel so that when you go into one part of the city or another part you feel like you’re in a city park system,” city Manager Meg Kelsey said “Branding’s going to be a huge component of improving our parks.”

Council member Willie Edmondson, who represents District 2, said he was pleased with the master plan because it produced a comprehensive evaluation of the city’s parks. Residents have told him in the past that they felt like District 2’s parks were being neglected.

“Just to see this right here certainly does give District 2 a shot in the arm,” Edmondson said.

Thornton agreed, saying that by adopting some of these recommendations in the coming years, the city would be “making specific, targeted investments in areas that may be underserved.”