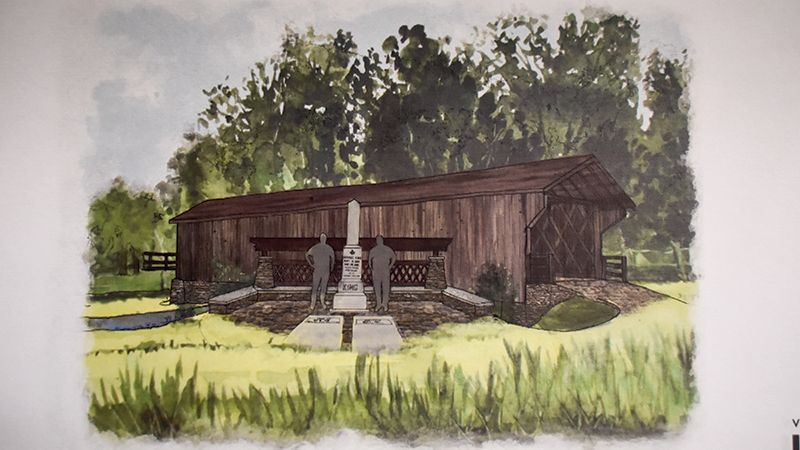 Planning is in the very early stages, but the city hopes to connect Horace King’s gravesite to The Thread via a covered bridge similar to the ones King built. Rendering by Skip Smith & Ashlan McHugh of Smith Design Group, Inc.

The City of LaGrange, in partnership with Visit LaGrange and The Thread, discussed preliminary plans to improve Mulberry Street Cemetery at the city council retreat on Aug. 25.

At the center of the plans is a shared goal to honor Horace King, the prolific 19th-century African American bridge builder.

King was born a slave in South Carolina in 1807. An architect, engineer, master carpenter and bridge builder, he designed buildings and bridges across the Southeast. He served two terms in the Alabama House of Representatives during Reconstruction and in 1874 moved to LaGrange.

All four of King’s sons worked under him, learning engineering and architecture skills. The Kings left their mark on the landscape of LaGrange. Visit LaGrange President Kathy Tilley said during the discussion that every building on the east side of Lafayette Square was built by King or his son, George King. George and another son of Horace, John King, built the Calumet Mill, which sat at the site now occupied by St. Peter’s Catholic Church and for which the Calumet Park neighborhood is named.

King and three of his sons are buried in LaGrange.

King’s grave is at Mulberry Street Cemetery, which also contains a civil war cemetery. The soldiers buried there were members of the Confederate and Union armies who died in LaGrange but were never claimed, according to Shannon Gavin Johnson, executive director of the Troup County Historical Society.

In 2015, the historical society determined there were also 400 people buried on a hillside at the site, most of them unmarked, most of them African Americans who were likely slaves.

Tilley explained that the cemetery could be enhanced to make it a heritage attraction, owing to the unique history of the property.

Tilley would like for each unmarked burial site to be marked, and for King’s grave to be enhanced.

Another thing that will increase the site’s appeal are plans for The Thread to run past the site. The seventh segment of The Thread, currently in the permitting process, is planned to run from Southbend Park down past the cemetery, before winding over to the rail line and going down Dunson Street toward Callaway Memorial Tower.

The Thread plans to build a bridge across a creek that will connect the cemetery to The Thread. King was famed for his covered bridges.

“When I heard that The Thread was going around that … And that they were going to build a bridge across to Mulberry Street Cemetery, I said ‘You cannot build a bridge that empties out in front of Horace King’s grave without it being a covered bridge,’” Tilley said.

The city, then, hopes to build a covered bridge in the style of Horace King.

Other improvements would include an overlook pavilion by the parking lot at the top of the hill, as well as an interpretive center, which would provide more information about the civil war cemetery, the hillside of unmarked graves and King.

“People who might like visit a Confederate cemetery might not visit one where somebody like Horace King is buried, or vice versa, and here we had an opportunity to tell the whole story,” Tilley said.

A winding path down the hill would lead visitors to the King grave. The gravesite itself would be enhanced with a seating area.

The idea was well received by council members.

“I think it’s ingenious because you have a confederate cemetery, you have Horace King that’s buried there, you have slaves that are here, all this information concerning a man that was a slave. His master freed him, and they formed this friendship,” said Council Member Willie Edmondson. “That’s love. To me, it’s love.”

“Where else are you going to have the opportunity to have all three of these elements in the south, not by design, but just the way nature works?” Gaskin wondered.