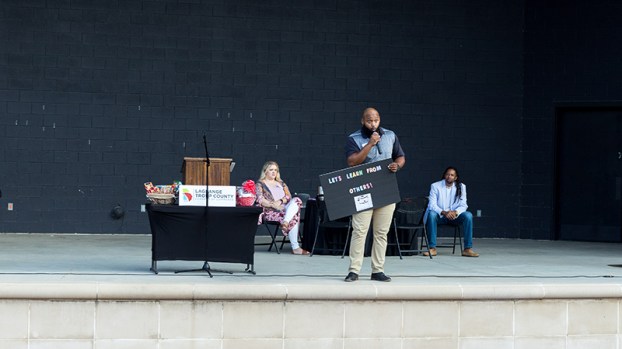 Most importantly, he told them to start waiting on a crockpot lesson.

“As I was in college, I learned from others,” Boddie said. “I learned the best lesson in my life from a homeless guy. My sophomore year at Shorter University, I’m headed to the Walmart to buy some ramen noodles. He’s standing on the side of the road, and he has a sign.”

Boddie said he has always had a thing for signs and listening when God gives him a sign.

“I go into Walmart and God is speaking to me,” Boddie said. “He says you’re going to talk to this guy. I stopped, and I started talking to the guy and here I am thinking I’m about to encourage him. I’m about to motivate him because that’s what we think when we see somebody down. But guess what? He motivated me.”

After going to buy the homeless man some Taco Bell, they spoke about blessings.

“He said, ‘you want to know what’s wrong in the world today? He said that we’re looking for a microwave blessing, so much in this lifetime, and we want everything quick,” Boddie said. “We need to wait on a crockpot lesson. We want everything so quick. We don’t we don’t want to try to understand other people. We don’t want to try to put ourselves in other people’s shoes because their situation isn’t like our situation.”

“Let God let everything simmer and savor in this pot,” Boddie said. “Then before you know it, it’s gonna start overflowing. He said, ‘but you got to wait on him.’”

Boddie explained putting things in a microwave warms it up quickly, whilst a crock pot fully cooks food and adds savory flavor but you have to be patient with it.

“I want to wait on God to bring me something that’s so good and so savory, “Boddie said.

“I just pray that y’all feel like that this morning. So, let’s learn from one another. Don’t think that you can’t learn from other people.”

Boddie said he would not be where he is today without the help of his grandmother, coaches, teachers, strangers and more spending time and uplifting him.

“People are important in your life and you may not even know,” Boddie said. “There’s been so many lessons that I’ve learned in my life from people that I didn’t even know. When God starts putting people on your mind, you’ve got to start helping them.”

An inmate in the Troup County Jail has been charged with criminal attempt murder for allegedly trying to solicit the... read more