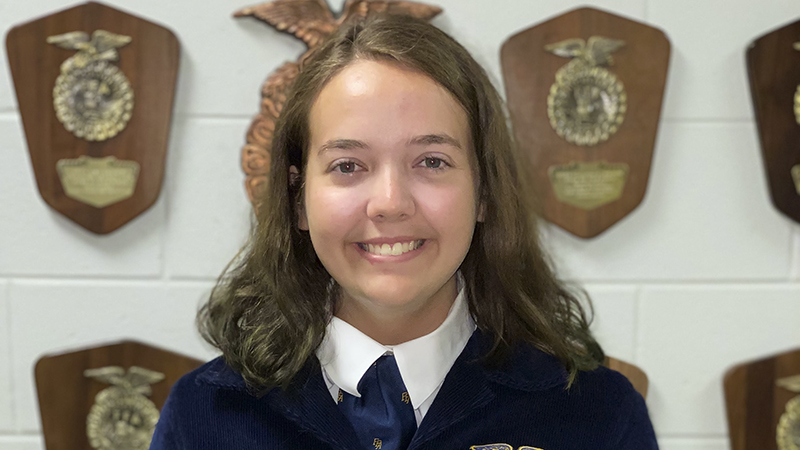 She recently received Gold on her Environmental Natural Resource Proficiency at the national level, which is one of the highest personal achievements a Future Farmers of America (FFA) member can receive.

“It all started my freshman year when I took a basic agriculture class,” Scott said. “When I joined FFA, I heard about all these competitions that they went to. I signed up for some of those, and it really just grew from there.”

“Then, I decided that I wanted to be more local to LaGrange, and so I contacted Chattahoochee Riverkeeper to see what I could do there,” Scott said. “Now, I test water samples for them and help make sure that my creek stays clean.”

Scott was able to get in touch with Hannah Bradford who was over the neighborhood water watch program and receive a whole testing kit to use for Yellow Jacket Creek.

Through Scott’s efforts, CRK has identified several contaminated creeks and located the source of the pollutant.

“I decided to apply for a proficiency award and thought I wasn’t even going to make it past the state level,” Scott said. “I mean just filling out the application and sending it off and then winning state, and then getting this gold award, It just is kind of crazy. It was an unexpected blessing.”

In the application, Scott had to explain what three of her greatest accomplishments or findings were during the program.

“My greatest accomplishment in this award area is discovering a spike in E.coli in Yellowjacket Creek,” Scott wrote in the application. “I had noticed that the water was not as clear as it had been in previous weeks, so I made sure to pay close attention to the data when it came back from testing. It turns out that the count of E.coli was at 2909 (MPN/ 100ml). That is a very high number so I notified the office immediately that further investigation needed to take place. They looked into the problem and the source ended up being a small sewage spill. I say this is my greatest accomplishment because data from around that time showed that the creek had not been having weekly testing.”

Scott said that if she had not been assigned to that creek, the spill may not have been found as fast.

“When Madison first came to me, she was very quiet and I started encouraging her to start moving forward and expand,” said LHS FFA Advisor Jessica Bowden. “She’s always said she wanted to work with water quality or she wanted to be a marine biologist. She got in touch with Chattahoochee Riverkeeper and then from there it’s just grown like crazy. For me, it gets me excited because she’s getting excited.”

Bowden, who has been at LHS for 11 years, said she has never had a student win a national award for FFA.

“It has motivated my students to see the potential they could have in FFA,” Bowden said. “

Sometimes it’s hard for students to see just how successful they can become until they see someone that actually wins an award like this. This is a really huge accomplishment for our chapter.”

Going forward, Scott hopes to get a state degree from FFA, which is the highest degree and is given to the top members of a State FFA Association.

“I plan to go to college and study environmental sciences and conservation,” Scott said.

Scott also won a FFA State Award in April, which is another first for the LaGrange Chapter.